Updated with photo and more details 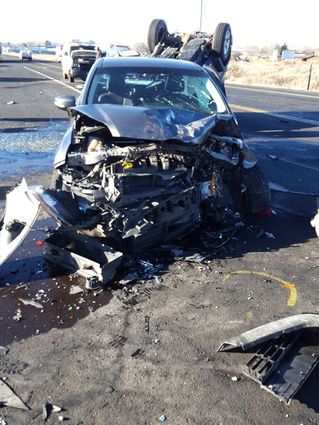 The front of Burton "Paul" Turner's car was demolished, as shown in this photo he took with his phone after crawling out the passenger side. The Jeep that struck his car is overturned behind it. The yellow mark on the pavement is from an investigation of an earlier crash at the same scene, Turner noted.

The Washington State Patrol said the collision occurred at 10:13 a.m. when a Twisp driver headed south in a 2014 Jeep Wrangler ran a stop sign where SR-17 meets SR-28.