Geology of the Candy Point Trail explained on hike 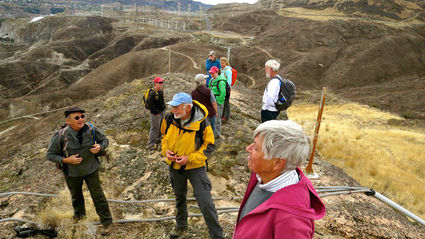 Gayle Swagerty, forground, rests at the top of Candy Point Trail, along with Don Chadborne of Spokane Valley and Jim Fox of Spokane. In the background are Scott Peterson and Megan Weeks of Anacortas, Michael Regal and Pam Mckenney of Spokane, Anna Hein of Pullman and Montana Hein of Spokane Valley.  - Gene Kiver photo

A group of hikers from Spokane, Cheney, Anacortes, Tri-Cities and Coulee Dam assembled at the trailhead of Candy Point Trail Sunday to walk it with scientists who would explain the geology of the rocks over which they were walking.

At the trailhead at 432 Columbia, in Coulee Dam, Dr. Gene Kiver and Bruce Bjornstad led the group.

Kiver retired from Eastern Washington University after teaching geology there for over 32 years. He has conducted an active research career that emphasized landforms and surficial processes. The Missoula Floods are among his main interests.

Bjornstad is retired from his work as a senior research scientist at the Pacific Northwest National Laboratory in Richland, Washington. He has studied Ice Age Floods for over 30 years.

Kiver and Bjornstad have co-authored a book titled "On the Trail of the Ice Age Floods, the Northern Reaches," published in 2012.

The hike began with a discussion at the trail head on the Ice Age Floods. They explained that the most recent episode of major ice sheet expansion occurred between 18,000 and 13,000 years ago. A lobe of the Cordilleran ice sheet advanced into what is today the Idaho Panhandle to the area now occupied by Lake Pend Oreille, blocking the Clark Fork River drainage and causing Glacial Lake Missoula to form.

The lake was more than 2,000 feet deep at its largest and held over 500 cubic miles of water. The lake may have emptied in as little as two or three days. When the ice dam broke, a towering mass of water and ice was released and swept across parts of Idaho, Washington, and Oregon on its way to the ocean. Over a period of years the glacier would advance, blocking the river, and the dam and lake would form again. The process was repeated scores of times, until the ice sheet ceased its advance and receded to the north at the end of the ice age.

Kiver and Bjornstad then led the small group up the trail, continuing the discussion of the geology of the area as well as its recent history in building the Grand Coulee Dam and marveling at the rock work done in construction of the Candy Point Trail by workers for the CCC in the 1930s.

The group headed over to Crown Point to look over the town of Coulee Dam and the geology across the Columbia River. They then returned to the Candy Point Trail to the top where they relaxed, ate snacks and lunch and continued the discussion before heading back down the canyon.

Work is continuing on the trail this October. A group of 15 members of the Washington Trails Association will arrive here on Oct. 21 and spend the weekend clearing vegetation, resetting trail stonework and retaining walls, grooming and re-establishing trail tread to proper widths as needed, and making assessment of future work and intervals.