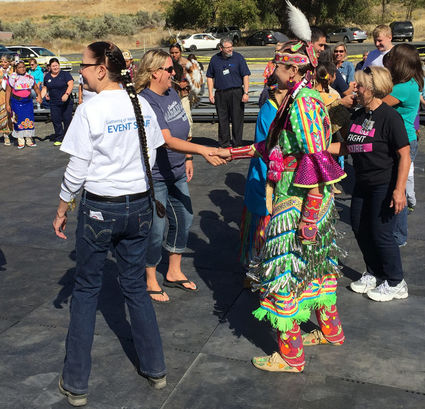 When Coulee Medical Center leaders wanted to find ways to cure the hospital's ailing relationship with members of the Colville Tribes, an idea for a good start popped into Shoshanna Jordan's mind: Hold a powwow.

The idea turned out to be a catalyst for much more, but the powwow came together after three months of planning last Friday.

Dancers from all over the Colville Reservation and further attended, plus participants from a Salish language school in Spokane, whose first- through fifth-graders played the "host drum."

The effort is part of a larger realization at the hospital of the need to offer some spiritual help for its medical patients at times when it's most needed.

CMC has started a chaplaincy program and currently has four volunteers for it, she said.

But the Colvilles, many of whose members had been going elsewhere for medical needs, warranted special consideration. Some 35 percent of CMC's patients were tribal members, and CMC professionals felt they would benefit from a better partnership with tribal health officials and Indian Health Service.

"How do we bridge the gap?" was a question they had for Jordan, a Colville member, when they interviewed her for the position she now holds as clinic manager. That's when she suggested the powwow.

Jordan started at CMC in July, 2015, having been administrator of the Colville Tribal Convalescent Center for six years.

The powwow became one avenue toward achieving one of several goals they decided to address: embracing cultural awareness and holistic care.

Jordan wore a radiant smile Friday after the four-hour "Gathering of Wellness," which she said was attended by four times as many people as she had envisioned. CMC's retiring CEO Debbie Bigelow, who gave the OK for the event after consultation with the board of directors, received a ceremonial blanket and an honor dance. Sponsors, with booths at the event, said they wanted it to happen again. And a lot of people who are not tribal members attended their very first powwow, learning along the way.

It was a good start, and the dialogue with tribal officials and members that resulted from planning the event opened up more avenues of cooperation.

"It's just blossomed because we opened up the dialogue," Hicks said.

CMC has been staffing a tribal clinic in Keller and just received a federal OK to work with IHS.

To fund powwow expenses, Jordan did research for a grant that shed more light on the nature of tribal health needs.

"Historical trauma," she said, has erected barriers to trust, and many Native Americans don't get checkups as adults or take children in for wellness checks that could prevent many health problems.

"That's why, I believe, our statistics are so high for death rates," much of it preventable, she said.

Some of that grant money, $13,000, will also go toward preparing an area for a permanent teepee just outside the hospital so that tribal members' families can perform traditional ceremonies for tribal patients, often with smoke and drums, that can't take place inside the hospital.

And planning has already started for next year's Gathering of Wellness, with one sponsor suggesting that they sponsor a lunch for all who attend.