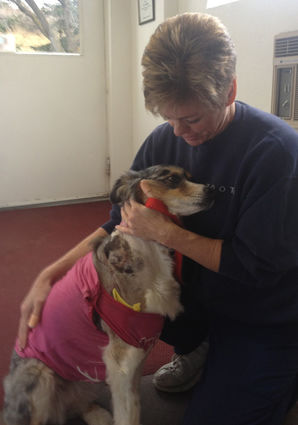 Angela Nomee and her dog, Ginger, were both attacked by a pit bull recently near the Methodist Church on March 14. The pit bull knocked Nomee down and bit her on her hands and arm, she said. Her dog had a tear on her shoulder and had to be treated by the veterinary clinic. - Roger S. Lucas photo

An Electric City woman walking her dog near the Methodist Church in Grand Coulee was attacked and bitten by a "huge" pit bull March 14.

Angela M. Nomee, 49, told police that she saw the dog but didn't think it was going to move from where it was; then suddenly it struck her, knocking her to the ground, and attacked her dog, Ginger, tearing a hole in its shoulder.

Nomee had bite marks on both hands and on her arm as a result of the attack. She said the pit bull, named "Rocky," must weigh 200 pounds and easily knocked her from her feet.

The dog belongs to Ayleana Caldwell.

Steve Carlson, who was cleaning the church at the time of the attack, said he heard screaming and raced from the church to see Nomee on the ground clutching her dog. Two witnesses were yelling, "Shoot that dog."

Carlson said he beat the dog over the head with a stick to try to get it away from Ginger. He said the pit bull had the other dog by the throat. An officer, with weapon drawn, stood in front of Nomee, and later police were able to get a leash on the pit bull and place it in a patrol car. The pit bull had blood around its muzzle.

Both animals were taken to the veterinary clinic for attention.

Nomee was taken to Coulee Medical Center for treatment of her puncture wounds.

Caldwell was told that her pit bull would be under quarantine at the veterinary center and that she would receive a citation in the mail.

Police Chief John Tufts stated that the animal could be described as "dangerous" under the law and the incident would go before the city council.