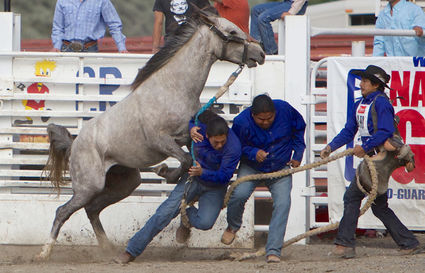 The Twisp team of Casey Heemsah, Clarence Meanus and Johnny LeClair experience the wild objections of a horse with no intention of being saddled in the first few seconds of the first go-round of the Wild Horse Race Saturday night. - Scott Hunter photo

The new feature of the event actually stole the show as teams of three cowboys tried to saddle a wild horse and ride it across a specified line.

There are several team members with aching muscles this week, and it was a wild event with things going on all over the arena.

The Casey Heemsah team from Twisp turned in first place. It included Heemsah, Clarence Meanus and Johnny LeClair. They took home the $500 prize money. Placing second was the Leroy Morningowl team from Yakima, made up of Morningowl, Cody Bruland and Dalton Davis.

The two teams advanced from their first go-round into the finals.

Organizers had been criticized for holding an event that some thought was "cruel" to animals. Horses were supplied by Steve Palmer, and it was reported by a letter writer to The Star how well they were cared for, even if they had not been ridden.

Ridge Rider President George Kohout said he was certain that the "Wild Horse Race" would be featured again when the Memorial Bull Ride comes up next year.

As a horse would come out of the chute, the cowboy team had a rope on it, and they tried to stall the horse long enough to get a saddle on it. Four teams at a time, it was a wild show.

The bull riding, the feature of the evening, seemed tame in comparison.

There were significant delays while some bullriders from the Winthrop area were enroute to the Ridge Rider arena.

They eventually showed, and the bull riding progressed.

Taking top honors was Jesse Kardos of Newport, who took the lion's share of the $2,500 added purse.

One bull refused to leave the arena and thwarted every attempt cowboys made to get him out of the way so riding could continue. It took about 15 minutes to remove the bull.

Kohout said the event was "highly successful" and the Ridge Riders were looking forward to next year's fourth annual bull riding show.

About an equal number of people occupied the viewing areas on either side of the arena. It appeared that there were under 1,000 fans who showed up.