Wilson thinks you're fed up 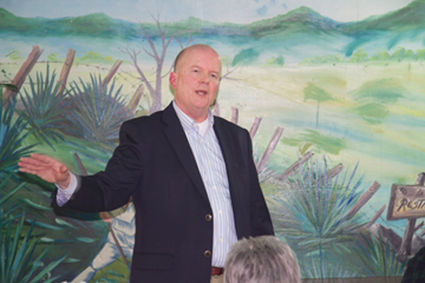 "Are you fed up?" asked Dave Wilson of chamber of commerce members last Thursday. "I'm still waiting to meet the first person that's not fed up" with "the disfunction in Congress."

Wilson says McMorris Rodgers is at the center of gridlock politics in the nation's capitol, where a group of about 30 ultra right wing politicians have formed a powerful caucus.

Wilson, a conservative running as an independent, believes its possible to form a more moderate caucus that could break the "tea party" hold on the House of Representatives.

Both the Democratic and Republican parties are controlled by their extremes, Wilson said, so he chooses to run as an independent.

"People are tired of the nasty and divisive politics," he said.

"I think I can do that," he said. "I think this is the year that an independent could win."

His top priority if he is elected is to form a centrist caucus with 25-30 members of mainstream Republicans and moderate Democrats.

"I believe we can influence legislation back toward the middle of the spectrum."

With a theme of "End the Gridlock," Wilson passed out a small brochure and made promises: He's not in it for the money and he won't take a pension. He won't take campaign contributions from special interest groups and will limit individuals to a $500 maximum per election campaign. He won't take part in a government shutdown or default. His office will get back to constituents within 24 hours. He'll hold monthly town hall meetings in the district, he said.

From Spokane, Wilson owned Interface Computer School for 29 years, he said, before selling it in 2011.