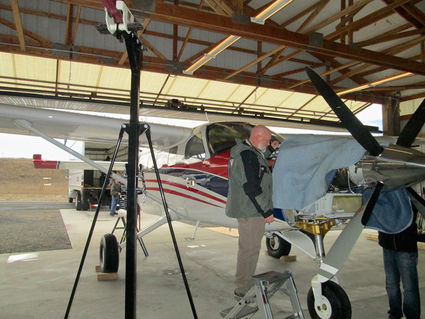 Patrick Barrett, from Quest, the manufacturer of this Kodiak aircraft, starts the process of replacing the turbine-powered motor. The motor experienced major problems while enroute from Paine Field in Seattle to Sandpoint, Idaho, and made an emergency landing here. The plane was pulled into a nearby hangar for the engine replacement. -- Roger S. Lucas photo

A 10-passenger airplane lost power Thursday morning and had to make an emergency landing at the airport near Electric City.

The turbine-powered Quest Kodiak left Paine Field near Seattle on a flight plan for Sandpoint, Idaho.

Somewhere near Lake Roosevelt's Swawilla Basin, the pilot experienced engine failure, turned back to the airport here and made a dead-stick landing. The plane had been flying at 13,000 feet and made a gliding return to the airport. It later was taken to a nearby hangar where another engine was delivered. Mechanics were in the process of installing it Friday afternoon.

Grand Coulee Dam Airport Manager Bob Babler, when he found out about it, made a call to the Federal Aviation Agency. A person there said they didn't know anything about the mishap.

Babler said when he went out to the airport, the plane was tied down and he couldn't see anything wrong with it.

The brand new plane was in the Seattle area being painted for its new owner, MAF (Missionary Aviation Fellowship), and was in the process of being delivered to its new owner in Sandpoint. The company has a training base at Felts Field, Spokane, and the aircraft was built at Sandpoint.

A spokesperson at the MAF headquarters in Nampa, Idaho, Dianna Gibney, said Friday afternoon that they were unaware of any problems with the aircraft.

Mid-afternoon Friday the aircraft was moved from the tie-down area to Dave Whitelaw's hangar where a new engine was being installed.

A spokesperson from Quest, the plane' manufacturer in Sandpoint, Julie Stone, said the aircraft will complete its final inspection and delivery will be made to MAF sometime later this week. It will be the 10th Kodiak in MAF's fleet.

A person familiar with the airplane said its cost was about $1.9 million.

Mechanics worked through the weekend to complete installation of the replacement engine so it could fly back to Sandpoint for delivery to its new owner.

Babler said it points out how important the airport here is, and especially to those who need a safe place to land.

The airport here has a 4,200-foot paved runway.