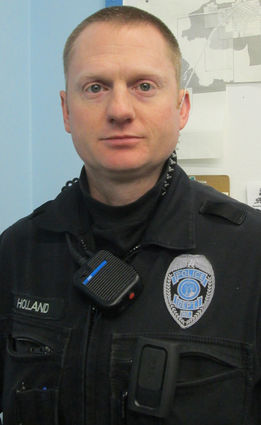 Police officer Dan Holland wears one of the new department cameras that will take video and record conversations with people stopped for violations. The camera is seen just below the officer's badge. Holland is testing the equipment and assisting in developing policies and procedures related to the cameras.

Sometime soon, Grand Coulee police officers will be wearing cameras that record video and audio to record your conversation when you are stopped for a violation.

The new equipment is in the trial stage now with only one officer, Dan Holland, equipped with the device while the department develops practices and procedures on how the program will work.

The camera is about three inches by two inches and clips onto the officer's uniform at an angle that allows video and sound.

The process allows officers to show the digital viewing when citations are challenged by those who are cited for violations.

The recording can be both seen and heard by a judge so a determination can be made whether a party is guilty of the violation.

The Grand Coulee Police Department has purchased eight of the cameras and will outfit all officers with the device after the testing procedure has concluded.

The cameras, manufactured by VieVU, has a 12-hour memory card and is battery powered. The LE3 version lists for $900 on the company's website.

Police can download the video and sound and store them for possible later use. 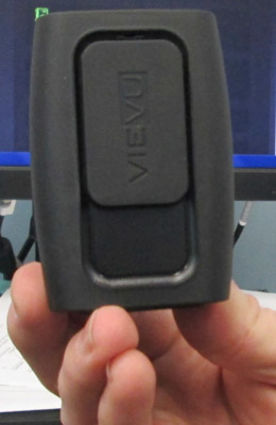 Police say the devices will be useful in refuting any charges made by alleged offenders that their incidents were mishandled by officers.

Holland started wearing his camera March 5, and has used it to develop recorded information in cases. He said it will be useful against "he said, she said" charges in cases handled by the department officers.

The device shows time of day and the date when it is turned on and used. And the high definition video is managed by proprietary software that catalogues and stores video files with a digital signature that proves the video has not been altered, according to VieVU.

Holland said officers will announce that offenders are being recorded on camera.

He has been in the department 11 years April 1, and will be manager of the program.

This article mentions the (Grand Coulee police department) purchased the cameras. Numerous police departments across the country are receiving grants from Homeland Security for this kind of equipment to supposedly fight terrorism (that out gov publicly funds in Syria, that kills less people than bee stings). So I was just wondering if the money came from them. $900.00 a piece is kind of expensive? Too bad we didn't have them when the computer mysteriously disappeared...

Very nice article sounds very reasonable, no one should question that? One tiny little key point Officer Holland failed to mention was that this device is facial recognition capable. In other words when the device interfaces with veripatrol/cloud or (guess the government agency)your cataloged into their system. Hmm sounds just like the compact version of what we were using in Afghanistan. Maybe I'm wrong but I think the people have a right to know. Yea, just label me one of those crazy conspiracy theorists, or you could do 2 minutes of research yourself and find out I'm right.