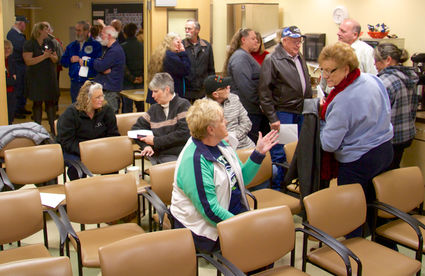 Citizens gathered for a hospital commission meeting Jan. 29 linger and discuss hospital issues while the board is in executive session. - Scott Hunter photo

With their constituents voicing impatience, hospital district commissioners took no actions after coming out of a closed session last week, but they voted in new leadership and streamlined committee assignments.

Tom Poplawski got applause from the full meeting room when he said deferring the beginning of action on a standoff between administration and medical staff was "unacceptable."

"Make a decision and let's move on," he said. "We need to start with a new goal here of getting somewhere."

With new Commissioner Betty Brueske taking office at the start of the year, some had expected the regularly scheduled January commission meeting to be one at which the commissioners would clearly take sides in the dispute they have sought to mediate.

Angela Gonzales wondered why the commision "can't revisit the providers' vote of no confidence."

"It has to stop," she said. "Why can't you guys have that vote now that there's five of you?"

Poplawski noted that everything had appeared to be wonderful in Chief Executive Officer Scott Graham's report to the board.

"It's not," Poplawski asserted.

Others defended the doctors and medical staff who have called for replacing Graham with a vote of no confidence last fall, and they issued continued criticism for a letter Graham sent out advising patients of a privacy breach implicating a physician.

That physician, Andrew Castrodale, in his chief of staff report, praised the hospital staff for its high performance even in the face of "this chaos." He thanked community members for attending commission meetings.

Fifty-year resident Felix Marcolin said "everything has gone kaput." He said there are too many "CEOs" and administration has ballooned.

The commission changed the regular monthly meeting schedule. From now on, that meeting will be scheduled for 7 p.m. on the second Monday of each month. That means the next meeting is set for Feb. 10, next Monday.

In its annual election of officers, the commission elected Commissioner Jerry Kennedy as president and retained Commissioner Geary Oliver as secretary.