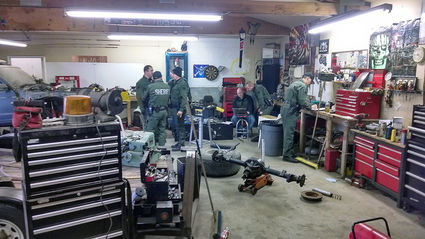 County sheriffs in the region have been collaborating on finding out who has been stealing from rural residents and getting their property back.

Last week, the sheriffs of Grant, Lincoln and Adams counties met in Lincoln County with their detectives to discuss the crimes and suspects, Lincoln County Sheriff Wade Magers said.

"As a result of communication, I believe that we have solved numerous crimes," Magers said. "Search warrants in Lincoln County, Grant County, and Spokane Counties were served this week, resulting in multiple arrests."

Deputies in both Lincoln and Grant counties have made arrests in the last few weeks, connected to sprees of theft.

"The suspects have been lurking around rural Lincoln County stealing metal, copper, wire, antiques, vehicles and related items to include a 1930 flat bed truck," Magers said. "Essentially, anything they can take and recycle for a quick cash transaction is what they are stealing."

Acting on a citizen's tip, Grant County deputies arrested a man Jan. 7 near Moses Lake in connection with Lincoln County burglaries. They said they found stolen property, some from Lincoln County, in a place where the suspect had stored it.

Then Monday, four men were jailed after officers raided a home east of Moses Lake, and a Quincy man was arrested for possession of drugs and stolen property in a raid on his home.

The Moses Lake raid was related to an investigation into the Jan. 20 thefts of property from National Frozen Foods in Moses Lake when a utility trailer, two pickup trucks, generators, tires, tools, storage tanks and hydraulic parts were stolen. With the exception of the pickup trucks, which were recovered earlier, the balance of National Frozen Foods' stolen property was recovered from inside and around a shop at the Road N address, the sheriff's office said.

Other suspected stolen goods were also found, some of which may be connected to thefts in Spokane, Yakima and Lincoln counties.

One notable piece is a $77,000 Bobcat loader listed as stolen from a Yakima County resident. Thus far, deputies estimate over $100,000 in suspected stolen property has been recovered.

"Deputies did a great job investigating this case, and tips from the public helped a lot," Grant County Sheriff Tom Jones said. "There was a large amount of stolen goods found at this location, and I'm sure the property owners will be happy to get their things back."

The investigation continues. Anyone with information about this case is asked to contact the Grant County Sheriff's Office at 509-754-2011 ext. 468, or send info to crimetips@co.grant.wa.us. Reference case number 14GS01015. Tipsters can remain anonymous.

In Lincoln County, Sheriff Magers said they are asking that people check their "scrap piles, out buildings, and properties to see if they have anything missing that may be part of these crimes." He said they have more suspected stolen property that is not matched to a known vicitm.