Birdwell selected 2013 Volunteer of the Year 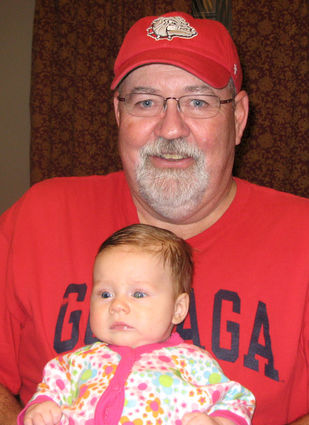 Jerry Birdwell is the area's "Volunteer of the Year" for 2013.

He was so honored by a vote of the people over three other candidates.

Birdwell, 58, of Grand Coulee, could also claim the honors as "Mr. Fixit" of the area, because you can always find him where there's some kind of a problem.

Birdwell edged out Fern Blaylock 59 votes to 55. Also nominated were Jan Erickson, who picked up 11 votes, and Heather Downs, who had 20 votes.

Those who know him say Jerry can fix anything, but since retirement, he has pursued his favorite pastime of golf, and has loaned his services to the golf course on many occasions.

Birdwell was nominated by two parties.

"Day after day, as the golfers hit the course, Jerry was at the course with his own truck, his own chain saw, his own tools working on the sprinkler system," wrote Lowell and Birdie Hensley in their letter of nomination. "Sometimes you could see Jerry's truck, and finally you would see Jerry's head pop out of the hole he had dug to find and repair a leak."

Betty Davis, of Coulee Dam, also nominated Birdwell. She wrote: "When the call went out for volunteers needed to keep the course open, Jerry was one of the first in line. He has worked tirelessly repairing and maintaining the water system, the electrical problems, as well as mowing and anything else that needed attention. Jerry is the go-to guy when things need fixing. No job is too big or too small, and he sticks to the task until the problem is solved."

Birdwell was named to a commissioner spot for Port District 7, which operates the golf course, and served in that capacity for a number of months before resigning last year.

It took too much time away from his volunteer duties at the golf course.

Birdwell was also praised for his volunteer efforts by Port District President Oroville Scharbach, who frequently commented during the port's monthly meeting, citing his unselfish help at the golf course. Birdwell is considered the "master" of the course's reputed troubled irrigation system.

He recently made comments on the troubled system during a grant exploration meeting, that it wasn't all bad, but needed a lot of repairs.

All the time he served as a commissioner, he was perhaps the most active volunteer on the course, running equipment and fixing problems.

He is also known for his abilities on the golf course. He shoots close to par.

He is remembered well from his school maintenance days. His former boss, then superintendent Dennis Przychodzin, said by phone from his present home in Surprise, Ariz., a suburb of Phoenix: "Jerry did a great job for the school district. He knew where everything was and worked hard. The district benefited greatly from Jerry being there."

Birdwell was born in Havre, Mont., and came to the coulee area with his parents when he was 2 years old.

He is a 1973 graduate of Lake Roosevelt High School, and in 1976 went to work for the school district in the maintenance department.

He later commanded the lead job there and served in that capacity for a total of 30 years, retiring in 2006.

Jerry and his wife Julanne, have one son and one daughter. The son, Jason, lives in Cheney and works for Eastern Washington University in the landscaping and maintenance department.

Daughter Megan is married and lives in Spokane, working as an orthodontic technician.

The Birdwell's have one grandchild, Ellie Kathleen, who was born Oct. 28.

Hats off to Jerry Birdwell, the coulee's "Volunteer of the Year" for 2013.