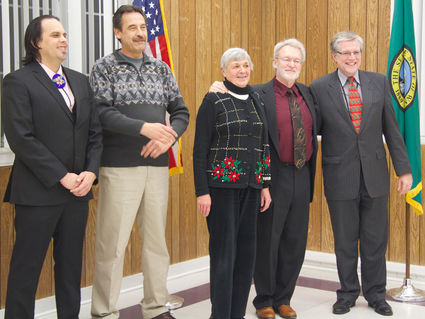 Newly elected Coulee Dam leaders stop for photos after being sworn into office Dec. 23, in a small ceremony at the town hall. U.S. Attorney Michael Ormsby, right, swore in Greg Wilder as mayor and Gayle Swagerty as councilmember; Dana Cleveland, left, of the Office the Reservation Attorney in Nespelem swore in Duane Johnson. - Scott Hunter photo

A new mayor and two new council members were sworn in at Coulee Dam last Monday.

Mayor-elect Greg Wilder, and council members-elect Gayle Swagerty and Duane Johnson all took their oaths of office at a ceremony at town hall with U. S. Attorney Michael C. Ormsby, United States Attorney from the Eastern Division of Washington, and Dana Cleveland of the Office of the Reservation Attorney at the Colville Indian Agency, officiating.

Over 60 persons showed up for the official swearing in process.

Wilder and Swagerty were sworn in by Ormsby, and after being introduced by Wilder as the "first Native American" to win a Coulee Dam council seat, Johnson was sworn in by Cleveland.

The three had won handily over their opponents in a race that attracted a lot of attention from Coulee Dam voters. The election attracted challenges in the three positions due to controversy over a planned $4.92 million wastewater treatment plant upgrade.

Wilder has promised a more "open" form of government and has said he plans several changes to the way meetings are conducted.

Wilder said he ran "to try to re-engage the community in actively participating with what we do as a mayor, as a council, with what we do to represent you folks. ... I'm going to have an expectation from you folks, as well, that you get involved."

Swagerty said "We're going to really work towards ... getting everybody in participation at every level that we can," Swagerty said, "so join us."

Johnson said he didn't run with a political agenda, but had simply decided it was time to serve the community he grew up in.

"I find it a blessing, too, in regards to the tribe, that we're a blended community and I'm just glad to see all of us start to come together more."

Wilder has already advertised for a new town clerk and a records clerk.

Wilder and the new council members will face their first meeting Wednesday, Jan. 8.

"I've got quite a few things on the agenda that are going to make a difference," Wilder said. "The more people in the room to help make that difference by your support, the better."