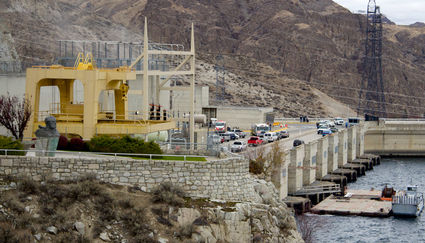 A Bureau of Reclamation employee was flown to Harborview Medical Center with injuries after a fire Monday in the John W. Keys III Pump Generating Plant, which a bureau press release said is believed to have been caused by a switch gear failure.

Another employee is being treated locally for smoke inhalation.

All plant employees were evacuated and acrid smoke rose out of the pump generating plant around noon Monday as multiple fire trucks were staged outside and firefighters were seen entering the building.

The pump generating plant at Grand Coulee Dam pumps water from Lake Roosevelt into Banks Lake to irrigate the 670,000-acre Columbia Basin Project. The flow can be reversed to generate electricity.

The plant contains six pumps and six pump-generators. At the time of the incident, four pumps and five pump generators were undergoing maintenance. The remaining units in the plant were not pumping water into Banks Lake or generating power.

Reclamation will undertake a thorough investigation into the incident.