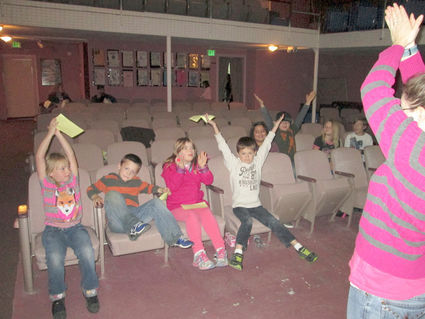 hildren from local schools take part in rehearsal Tuesday for Blackbeard the Pirate, a Missoula Children's Theater performance at the Grand Gallery Theatre this Saturday. Practices continue all week from 3 to 8 p.m. - Roger S.Lucas photo

You can meet Blackbeard the Pirate this Saturday during two performances of a children's play by the same name at the Grand Gallery Theater in Grand Coulee.

Children have been practicing all week with personnel from the Missoula Children's Theater organization and will perform at 2 and 6 p.m. on Saturday, a project of the local PTA.

Children from local schools auditioned Monday afternoon at the theater at ?? Main Street and immediately began practices. This week practices are from 3-8 p.m. each day.

Among the roles cast are Blackbeard and his crew of bearded pirates, sailors of the high seas, cranky crabs and crocodiles, magical mermaids and seaweed creatures, parrots and even some beach bums.

Assistant directors will were also cast to aid in rehearsals throughout the week and to take on essential backstage responsibilities.

Child actors come from kindergarten through sixth grade, all students in local schools.

The event is a fundraiser for the PTA, and is the second time Missoula Children's Theater has produced plays here.

Admission prices for the two productions on Saturday are adults, $9; seniors, $7; and students, $5.