Crowd gives CMC board an earful 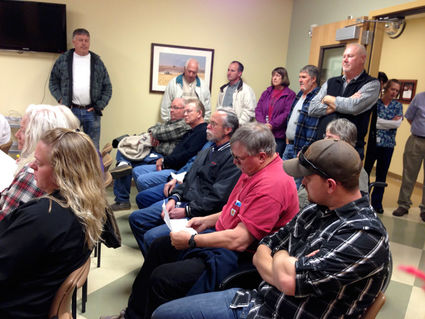 A standing-room-only overflow crowed packed the monthly meeting last week of the hospital district commissioners who oversee Coulee Medical Center, speaking out on issues some feared are weakening the hospital's viability.

Issues they wanted to address ranged from the name of the facility itself to the addition of administrative positions during a challenging financial period and staff cuts. But discontent centered around the decision to stop offering laboratory tests for low cost during hospital week last May, when many didn't buy the official explanation: that the practice, which has since been picked up by Lincoln Hospital in Davenport, was illegal.

Hospital District 6 Commission President Greg Behrens asked attorney Jim Fredman to explain why. Fredman said that federal rules for Medicare and Medicaid generally don't allow for discounts on services those programs cover. Doing so can risk a $15,000 fine per test, he said, noting there are limited exceptions for specific illness screenings, such as for diabetes. But offering discounts on all lab tests for a week puts the hospital at legal risk, the attorney said.

"How is that any different than $20 sports physicals?" asked resident Steve Salstrom, whose wife, Gerry Salstrom, was running for a spot on the commission. Others asked why all lab tests aren't allowed as screening tests for preventative care.

A nurse in the crowd said she sees patients every day who can't afford the regular lab fees and plan their health care strategy around what had been the hospital's annual lab offering during national hospital week in May.

"I'd like to find a legal way" to bring back the discounted lab week, offered Commissioner Jerry Kennedy.

Behrens said, "The board totally hated to see that go away."

The board voted to form a "compliance committee" to explore ways to bring back the lab week discounts.

Other complaints were not so readily addressed.

Following a meeting protocol officially adopted at a special meeting the previous Friday night, Behrens kept the public comment period at the end of the agenda, after a 45-minute executive (closed) session, despite Kennedy's suggestion otherwise. That left the public to mill about the hall and in the small meeting room, grumbling about the wait.

"The feeling I got when I walked into the room," noted Richard Brunner at the start of the comment period, "was that you guys are putting up walls and digging a moat."

He and others were critical of staff reductions. "A hospital is more than a building," he said. "It's staff. ... It would behoove you as a board to make sure you're getting information from all sides."

Citizen Lee Button charged that the board was not holding the administration accountable and that cuts should start from the top, not the bottom.

Milt Snyder complained that "the turnover here is incredible," a sign of poor management, and that prices are so high that locals are going elsewhere for health care.

Snyder, who owns a professional building across the street, also said he was "perturbed" that CMC had drawn away some of his tenants into the old clinic building, costing him about $15,000 so far. He said the city was told what is now called Professional Building A was to be used for storage after the new facility was built.

Salstrom wanted to talk about why some health care providers were no longer employed at the hospital and said management was top heavy, with several administrators earning more than $100,000 annually.

Talking to the issue of prices, Behrens urged everyone to look them up and compare them to other facilities on a website that offers up the information: http://www.wahospitalpricing.org. He said the hospital's prices compare favorably to others. And he noted that setting them was a complex process involving negotiations with insurance companies.

The amounts charged by hospitals does not equate to the amount they end up collecting because of deals made with insurers.