Gems in the Coulee - Mikey Williams 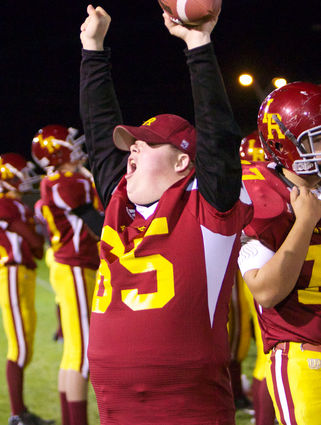 The Raider sports is in full swing at Lake Roosevelt, and for one person football season is his time to work. He is at every practice, every game (home and away), every meeting, he even checks in on the athletic director from time to time to make sure he is doing his job. You might have gone to a home football game and seen him, or you might have run into him in the store as he is hugging someone and giving an enthusiastic smile with a “Hey Buddy.” You might have got a look at him working at The Star newspaper too. He is known by only his first name to most — Mikey. This is about him, a Gem in our community.

“Mikey is a one of a kind” said Lake Roosevelt football’s Head Coach Steve Files. “He has more enthusiasm and love for the Raiders than anyone on the team. … He is a big part of football here.”

Just ask anyone at the Seattle Lutheran game, where the Raiders won in a blowout game. “Mikey wore himself out doing touchdown dances on every score and every big play,” Files told me as he remembered what his brother had told him after the game.

Every referee knows Mikey, (who is officially the manager/ball boy for the Raiders, although he tells the players he is Coach Williams), every head coach, every cheerleader and most players throughout the league. There are even some Oregon Ducks that know him personally. Mikey's brother, the late Rob Williams, played there and is in their Hall of Fame.

“I think Mikey associates football with his brother,” Files said with a little emotion in his voice. Rob was a coach here at LR when he passed away a few years ago. Mikey looked up to Rob, but that is an understatement.

Athletic Director Rich Black said Mikey brings a special element to football games; every student knows him and loves him. “His heart is invested here at LR, and we love him.” Black added.

Mikey graduated in 2006 from Lake Roosevelt but he was there on the first day of school this year anyway. He was there greeting all his friends, welcoming them back to school and asking for the names of the people he didn’t know. They are now his friends, too.

But football is where he excels, and that is his passion. He is detail oriented, says Black.

“He knows if something on the field is set up wrong, or if the score board is showing the wrong score or quarter,” Black says. “He even reads every program to make sure everything is spelled right and no one’s name was missed, especially his own.”

He doesn’t miss anything either, as I learned the hard way recently. I have been the voice of the Raiders for a while now, and I am kind of known for giving the players nicknames. Well Mikey pulled me aside recently and told me what he wanted his nickname to be, and he made sure I wrote it down and spelled it right. But you will have to come to the game to hear it.

Austin Rosenbaum, Trey Nicholson and Nathaniel Hall, like a lot of Raider footballers past and present, have seen the spirit of Mikey, too, and have been touched.

“He gets you pumped up and excited to play football,” said the freshman Hall. Junior Rosenbaum added, “He brings a lot of spirit to the field every time he gets near it.” Trey summed it up perfectly: “He is the backbone of the team.” Powerful words for the Raider ball boy. “Oh yeah,” Trey explained. “Without him, none of us would have balls,” and a smile came across all the boys’ faces.

Black and Files were a little more serious with their closing words about Mikey.

“Mikey is more a part of LRHS than most all of us here are,” Black expressed with every bit of seriousness in his eyes. Files words were just honoring. “Mikey is just as much a part of Raider football as the LR on the side of the helmet.” Wow, big words from the two leaders in Raider football. But I know those words are true.

Mikey is my friend. He always asks me about my “hot” wife and our kids. I was friends with Rob and I know how close they were. Rob was pretty much Mikey’s world and I know he is never far from Mikey’s thoughts when he is on a football field. One way I like to look at it is, God may have had to take Rob from Mikey, but he gave him a never-ending list of football players that will keep coming and coming and becoming brothers on the field.

Mikey is the heart of Raider football, and LRHS for that matter, and I look forward to every game watching him lift his hands to the night sky and shouting out his brother’s name. I also look forward to seeing a lot more touchdown dances. Thank you Mikey, for just being you.