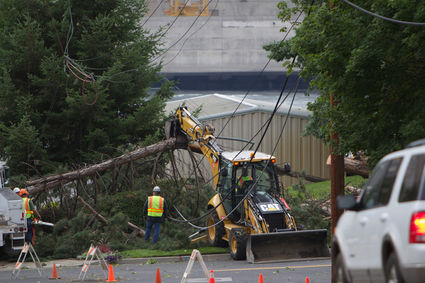 Crews work on clearing out fallen trees Monday morning. The trees hit powerlines so hard they broke two power poles and laid the electrical lines across the highway in Coulee Dam, closing the road two hours and setting up the need to detour traffic. Power was restored to west Coulee Dam Monday evening.

It was storm story time in the coulee area Sunday night as the region was hit by a severe wind, thunder and lightning storm.

Power was out for some, trees were down, traffic in some areas was stalled or rerouted, and tree limbs and debris were everywhere.

The wind tore shingles from roofs, with the most serious being the Coulee Dam Casino, where the wind curled the metal part of the roof like a sardine can, covering the casino’s rooftop sign.

Traffic on SR 155 near Pole Park was stopped because a number of trees blew over, causing power lines to go down on the highway.

Power lines were down behind Jack’s Service in Coulee Dam . Major power outage was caused when a tree fell over, breaking two poles and dropping power lines on Columbia Avenue, across from the town’s maintenance buildings. Power was still out for a section of West Coulee Dam at 6 p.m. Monday, with power finally restored shortly after that. A tree went down closing off Douglas Street.

Holly Street had three giant trees down and that cleanup was continuing Tuesday.

Henry Hix’s house at 611 Spruce Street is a corner shorter and a side porch lay flattened somewhere beneath a big blue spruce as he and friends worked at cutting it up Monday evening.

The worst of it lasted 20 or 30 minutes. The powerful wind sent Grand Coulee Police Sgt. John Tufts’ own wind gauge off the charts, he said. Tufts lives in Electric City. But one weather station three miles southeast of Spring Canyon recorded winds up to 65 miles per hour, the National Weather Service said Tuesday.

“Now imagine that for four hours,” noted Bob Hickey as a huge fallen spruce from his yard on Holly Street in Coulee Dam was chopped up Monday. “That’s a hurricane.” Hickey moved here from Louisiana to open his plumbing business several years ago.

Cary and Linda Sherman’s Lone Pine area home was still without power Monday night, after Nespelem Valley Electric crews cut their power line for safety as it lay beneath a downed tree.

The north side of the 300 block on Roosevelt Way in Grand Coulee lost power, Lakeview Terrace had power outages when trees crashed down, dumping power lines and hitting mobile homes. Weil Place residences lost power and there was an outage at 312 Mead in Grand Coulee.

The Bureau of Reclamation reported that its wind gauge showed gusts just over 52 mph.

Spokane news stations warned that the storm would hit just before 9 p.m. A National Weather Service warning listed “Spring Canyon Campground” as a point in the path of the storm farthest west. But the wind hit suddenly from the south, and the gusts were so strong that it immediately felled trees and tore shingles from roofs.

Part of the roof over the picnic area in North Dam Park was dislodged. A tree there was down and another lost several large branches. The shelter roof that was over the seating area at the taco truck business ended up at the bus stop in front of the Variety Store on Midway. A garage had its roof peeled on Pearl Avenue in Electric City and there was report that several trees lost huge limbs.

A tree fell on a vehicle on F Street and Second in Grand Coulee and another tree came down on B Street and 4th.

Crews were called in Sunday evening in Coulee Dam and they worked until early morning, then returned at their regular shift time to continue the cleanup. By the end of Monday, a lot of the trees were cut up and removed and the debris that had lined the streets was gone.

There were no immediate estimates of damage totals.