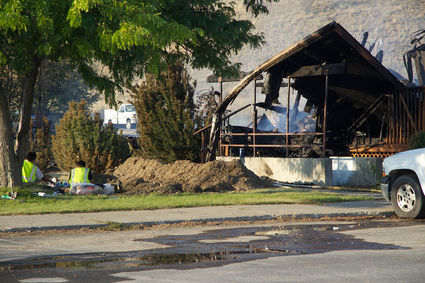 The remaining peak of the A-frame style headquarters of the Colville Tribes rests atop ashes collapsed into the building’s foundation as tribal workers work Monday night on rerouting infrastructure. — Scott Hunter photos

The building that has housed the headquarters of the Colville Tribes for decades burned down early Monday, leaving tribal leaders to figure out how to spread out even more of their government operations across the agency campus.

The aging A-frame building, itself the subject of recent controversy, inspired emotions of a different sort in the pre-dawn darkness as flames licked the sky and what had been the roof over much important tribal history collapsed.

“That was the face of our nation,” mourned Shawnee BearCub, who, along with others the next day, erected a teepee in front of the tragic scene as a symbol of resilience, a comfort and a reminder of great leadership. “Many people cried last night,” she said Monday, and several sang songs of mourning.

Some 40 tribal employees of several departments were displaced by the blaze. Non-essential personnel were told not to go to work Monday, a communication made through a Facebook post, since the tribe’s phones and email were down.

“For the first time in our government’s recent history, our legislative body and Administration is without a Headquarters,” noted Colville Business Council Chairman Michael O. Finley in a statement Monday. “We are shocked and saddened at this development. Many irreplaceable Tribal and personal items were lost today. Fortunately, no one was hurt.”

Built in 1975, the building, with its creaky floors and knotty pine interior, housed the Colville Business Council and the great table that hosted their deliberations; and offices of the tribes’ executive director, Land and Property, Information Technology, and Elections departments.

The building, which did not have a sprinkler system, was insured.

The fire was reported about 1:15 a.m. Finley said officers arrived within five minutes, but five minutes later the building was fully engulfed in flames.

Crews from the Bureau of Reclamation, Grand Coulee, and Coulee Dam all assisted the Colville Tribal Emergency Services fire crews. “We are very thankful for the assistance we received in fighting this fire,” Finley said.

The building had already been slated for replacement with some $40 million of a $193 million settlement with the federal government, a decision by tribal leadership that proved controversial among some members who thought the money should all be “paid out” to them.

Finley said Tuesday the construction process, in the architectural design phase, would now have to be expedited.

In the meantime, an expansion of the tribal court building, about two weeks from completion, will be commandeered to house tribal administration workers, Finley said. 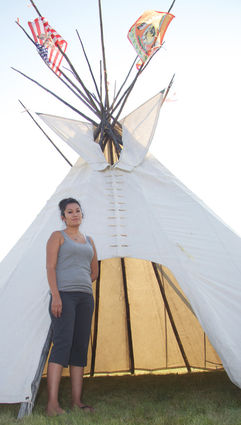 Shawnee BearCub in front of the teepee she sees as a metaphor of resilience to bring comfort.

Finley praised a tribal response team he said had been working around the clock to restore services. As of Tuesday morning, about half of the agency campus phone and Internet service had been restored.

Without that, tribal programs are shut down. The Indian Health Service clinic had been unable to see patients.

Some of the most recent Colville Business Council documents were lost in the fire, Finley said, but most had already been archived off site.

But other crucial records were lost, which could affect tribal programs that operate on federal grants.

“I can tell you without a doubt that there was a lot of original correspondence lost,” Finley said.

Investigators were working to determine the cause of the fire.

Tribal police early Monday morning were looking in Coulee Dam for a vehicle possibly connected to the fire, according Coulee Dam Police records.