Fires held back by fire fighters 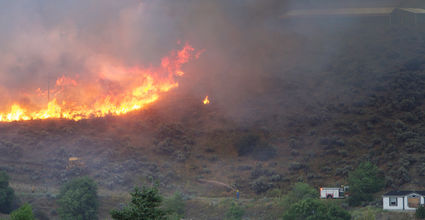 Firefighters and a bulldozer operator prepare for battle with a wildfire approaching homes and the Highway Tire building Sunday night. — Scott Hunter photo

Two fires separated by a couple of miles and a day scrambled local fire fighters early this week to protect property.

Brisk winds pushed a fire Sunday night perilously close to Lone Pine homes and briefly brought on a level-three evacuation notice for that area as well as River Drive in Coulee Dam.

Monday, fire marshals were combing the area trying to determine the cause of the 15-acre blaze.

The fire started shortly after 7 p.m. and lit up the skies as flames worked their way through grass, sage and bitterbrush.

The quick work of firefighters from several agencies kept the flames from crossing the road into the residential area of Lone Pine and they were able to later isolate the fire before wind whipped it into Coulee Dam.

Units from the Colville Confederated Tribes, Bureau of Indian Affairs, Department of Natural Resources, Bureau of Reclamation and local districts all responded to the blaze.

Two dozers and six engines were at the scene along with some 30 personnel.

Downed power lines caused a power outage for a number of homes in the area and Nespelem Valley Electric was working to restore service.

On Monday evening, another fire broke out near a house at milepost 33 on SR 155 near the rock cut, again causing authorities to close the highway.

The fire had burned about 200 acres as of Tuesday afternoon, Fire Information Officer Alan Hoffmeister said. The fire was considered contained but “certainly not controlled,” he said. The road closure would be reconsidered late in the day. A detour through the Lower River Road was available.

Two 20-person crews, five engines, a helicopter and a Fire Boss aircraft were on the fire.

The causes of both fires are under investigation.

Another fire near Keller broke out Monday about noon, Hoffmeister said. The John Tom Fire had burned 15-20 acres.

Hundreds of acres on the Colville Indian Reservation burned last week about 50 miles southeast of Keller on Lake Roosevelt.

A spokesman from the Mt. Tolman Fire Center said the fire started July 4, along the shoreline and that it was human caused. Details of that were not available.

Five 20-man crews out of Mt. Tolman, plus five engines and five water trucks, were involved fighting the fire. One airplane and two helicopters were used to curtail the fire.

The spokesman stated that there were 120 personnel assigned to the blaze, which worked its way through fallen dead trees, grass, sage and bitterbrush.

The fire started Thursday afternoon and was within the Hellgate Game Preserve on the Colville Indian Reservation.

Incident Commander Buck Sylvester said that Saturday was a “very good day” with firefighters getting a line around 80 percent of the burn.

Mt. Tolman reported another small fire developed out of Keller on Monday during a thunder and lightning storm that worked its way through the area. A spokesman said that firefighters had already been assigned to that area.