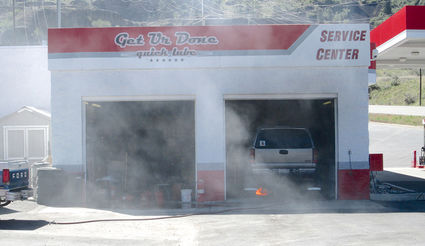 Flame is visible on the floor below the left side of the pickup just before fire fighters arrive Monday morning. — Roger S. Lucas photo

A fire in a service bay at Jack’s Four Corners Union 76 that could have been a disaster was quickly extinguished by a combination of firefighters mid-morning Monday.

A vehicle in the service bay at the station caught on fire when gas ignited and attracted a variety of fire engines and law enforcement units.

The 2001 GMC extended cab was described as probably a total loss with some material at the repair shop damaged. There was no damage to the rest of the structure.

Douglas County Fire District Chief Dale Rinker just happened to be in the area when the fire started. Units from Grand Coulee, Douglas County and the Bureau of Reclamation all responded to the 10:25 a.m. call.

Workers had tried to put the fire out using extinguishers, but the fire was put out by firefighters using foam from a fire truck.

Grand Coulee Fire Chief Richard Paris stated that it was lucky that no one was injured. The business was re-opened within an hour.

Paris said an electrical spark had ignited gas fumes from a spill on the floor as the vehicle’s fuel tank was being emptied.