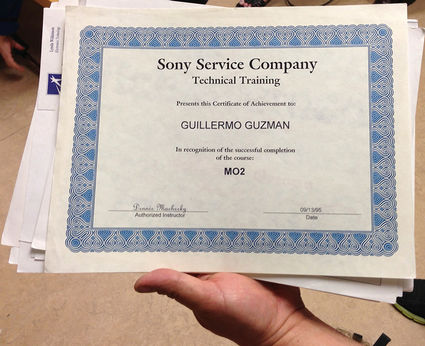 At an arraignment hearing for his brother Monday, Carlos Guzman Romo anxiously showed a reporter a portfolio stuffed full of evidence he thought showed that his brother is a “really good guy” who had put himself through the University of Washington by working hard as a technician.

Guillermo Guzman Romo, 43, a teacher at Lake Roosevelt High School since 2008, is accused of fraud and identity theft. Police say he was using another man’s Social Security Number to stay in the country illegally.

Carlos was surprised by all his brother’s accomplishments. With a note handwritten by Guillermo on an envelope, Carlos had retrieved a container of certificates of technical training and letters of recommendation from people attesting to Guillermo’s hard working and affable nature.

“I didn’t know he had all this,” Carlos said.

A thick folder of certificates from Microsoft, Sony and other tech companies, and letters from supervisors or teachers speak to Guillermo’s skills and character.

And one document from the U.S. Department of Homeland Security’s Citizenship and Immigration Service provides a glimpse of an apparent attempt to gain a visa with the help of his brother Conrad, a United States citizen.

The Notice of Approval of Petition for Alien Relative, addressed to Conrad, is dated April 6, 2011, some 10 years and one month after the application had been made.

The document says Guillermo is classified as an immediate relative of a citizen with no guarantee that he would eventually be declared eligible for a visa. It also notes that Guillermo “is in the United States and will apply to become a lawful permanent resident.”

Monday afternoon the teacher sat in Okanogan County Superior Court, waiting for his lawyer to get the chance to argue on his behalf, waited as other lawyers parsed the fine points in cases involving alleged murder and drug dealing.

Several hours later, the teacher pleaded not guilty to both charges, and attorney Jay Manon told Judge Henry Rawson that his client was not someone who would run away, having lived in the United States for 22 years, teaching for eight of them, five at LRHS.

The state opposed allowing him free without bail, noting that Guzman may not have control over where he will be because of the immigration matter in federal hands.

His brothers had planned to post the bond, which would basically have put him into the hands of the Border Patrol for questioning in Tacoma about his status. Carlos Guzman said Tuesday they would not do that until Monday, after another hearing.

Manon said Guzman is not in danger of being deported, but that the federal agency has some matter to clear up.

Noting the approval of his 2001 petition, Carlos Guzman said Tuesday he’s sure the case will turn out all right.

“I’m 100 percent sure that everything will be just fine,” he said.