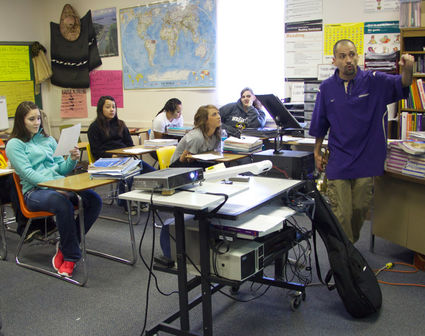 uillermo Guzman gestures toward a lesson on a whiteboard in his Spanish language classroom at Lake Roosevelt High School. ­ — file photo

A Spanish teacher at Lake Roosevelt High School is in Okanogan County Jail this week, facing charges of forgery and identity theft, after being arrested last Thursday by Coulee Dam police.

Guillermo Guzman has also had a hold placed on him by Border Patrol agents and he will face deportation hearings in Tacoma when he is finished in Okanogan County, according to a jail spokesman.

Guzman was picked up by Coulee Dam police officers along with a Border Patrol agent after a man with a similar name had tried to file for Social Security benefits and was denied because the federal agency’s records showed that he was employed as a teacher in Coulee Dam.

That prompted his call to Coulee Dam police last Tuesday.

Guzman, originally from Mexico, holds a bachelor’s and a master’s degree from the University of Washington and a state teaching certificate. He taught on the west side of the state before coming to Lake Roosevelt in 2008, the only applicant for the Spanish teacher position at the high school.

A person who has been doing substitute teaching in the district is taking Guzman’s place at the high school, where he has taught Spanish and world history. Guzman is currently on paid administrative leave until his status is legally determined, Carlson said.

Students at the high school Monday described Guzman as a hard-working teacher who stays hours after school correcting student work and as a man with a big heart who helps others.

They noted Guzman’s absence places a strain on the remaining school staff, with his substitute already having taken over English classes for Brandon Byers, who took an interim principalship at Grand Coulee Dam Middle School in February.

The local Spanish teacher’s arrest occurred just as national attention turns to the debate on immigration reform about to begin in Congress, a debate expected to take months.

A Senate bill introduced Tuesday night would remove the threat of deportation for nearly 12 million people who are currently in the country illegally. It would also make them wait a decade for full citizenship status and make them pay fines and penalties.

In 2013, the United States will limit the number of “preference visas” issued to applicants in any one country to 26,600. The number of people in Mexico on that waiting list is 1,316,118, according a Travel.State.Gov, a website of the Bureau of Consular Affairs of the U.S. Department of State.

I have known Guillermo for many years, ever since he was a student of mine at the University of Washington. So I am very, very surprised to read this story. There must be some gigantic misunderstanding. Guillermo was not only a brilliant student in all my classes, but he is one of the most wonderful, compassionate, thoughtful, and dedicated students I have had in thirty years of teaching. His own personal story of overcoming hardships and challenges growing up, and then his passionate commitment to education, has been an inspiration to all his friends and acquaintances as well--and even to his former teachers! His goal was always to give back to his own students the joy of learning that he had discovered in school, and in order to do that he went on to get a Masters degree in education so he could teach high school. I have actually Skyped with one of his classes just a few months ago (while I was still in Seattle), and enjoyed every minute of the conversation with his students. I earnestly hope that this misunderstanding can be cleared up as soon as possible so Guillermo can be back in the classroom where he belongs! Alan Wood Professor, History University of Washington Bothell