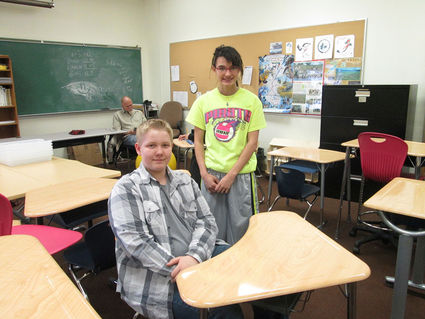 Kourtney Harrington, an eighth grader, and Dylan Jenkins, a seventh grader, look over the range of new furniture for the new school building. The new furniture samples have been set up in a spare room at Grand Coulee Dam Middle School so staff and students can give their impressions of it. Members of the district looked over the range of furniture at the company’s assembly plant in California earlier this year. The new complex will have all new furniture when it opens sometime in the fall of 2014. — Roger S. Lucas photo

The school board Monday night awarded its K-12 new school project to Walker Construction of Spokane.

A decision to extend the bidding process may have cost the district the ability to start school in the new buildings in the fall of 2014.

Superintendent Dennis Carlson said this week that with a 530-day construction schedule, the project could go until mid-October, 2014.

“There will be inconveniences, but the payoff is worth it,” Carlson stated.

The district had planned for construction to be finished so school could begin in the new layout.

The late move will be a bit of inconvenience to the district, but all furniture and materials in the new school will also be new, which eliminates a lot of last-minute moves.

The district’s architectural firm, Design West, the firm hired to oversee the project, Wenaha, and Carlson, all recommended Walker Construction.

The bid of just under $23 million includes demolition of the Lake Roosevelt High School education wing.

Carlson said construction could begin by mid-April, if all the contracts, and bond issues are finished in time.

The initial phase of construction will provide fill material that will raise the construction site where the old Wright Elementary School was located some five feet higher than its present level.

The district will be contracting for the data cabling separately and by doing so will be able to get federal E-Rate reimbursement of about $90,000.

In addition, Walker Construction has offered to develop the playground equipment outlined in the bid document, outside its bid, and gift it to the school district. That lowered their bid by $84,000.

In a related part of the project, the district will direct that half of one percent of the cost be devoted to art work, to conform to building requirement using public money. “We will name someone to spearhead this endeavor,” Carlson said.

The bid amount, and expenses already incurred will mean that the remodeling of the present gym at Lake Roosevelt will be on hold. A reserve 5-percent contingency fund, in case anything unexpected happens, might hold the key to whether some work will be able to be done on the gym.

The demolition of the Lake Roosevelt educational wing will occur after the move into the new building.