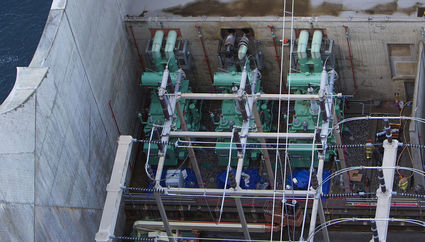 The outside evidence of damage is shown by the missing and burned “buss,” the pipe coming out of the wall to the middle of three transformers between the right powerhouse and the Grand Coulee Dam. Note the workers and firefighters at lower right. — Scott Hunter photo

An explosion at Grand Coulee Dam Saturday morning damaged the right powerhouse when a line and equipment connecting a generator and transformer exploded.

No one was injured.

A “buss,” essentially a pipe and related equipment housing a large electrical line, exploded, reportedly causing considerable damage even to the building’s concrete.

Acrid smoke was so thick that firefighters responding could not initially enter the building, and the Bureau of Reclamation will not likely allow personnel inside until after chemical tests on residue are completed to learn how the leftover chemicals can be handled safely.

The powerhouse was “roped off” Monday morning, reported Public Affairs Officer Lynne Brougher. The entire right powerhouse was not in operation, keeping nine generators rated at 125,000 kilowatts from producing electricity for the region’s power grid.

A view of the transfomer area between the powerhouse and the dam itself showed the buss is clearly destroyed, but an engineer who had been inside said the damage is much worse there.

The buss leads from the G-10 generator to the middle of a group of three transformers that were replaced last year, following a rupture in one of them that occurred in 2006.

Workers have reported that the transformer seems to not have suffered from the incident.

Brougher said the Bureau of Reclamation will investigate the cause, but it may be some time before it is known. She said an investigation will likely be conducted out of the bureau’s Denver, Colo., office.

The accident occurred about 9:30 a.m. Saturday.

At least five siren calls for assistance from neighboring fire departments were heard after the U.S. Bureau of Reclamation’s own fire department responded to the accident at the initial alarm.