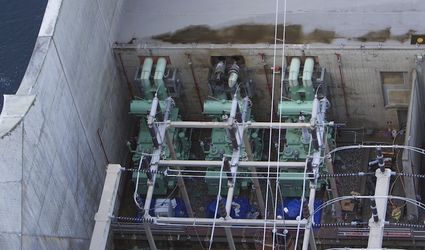 The outside evidence of damage is shown by the missing and burned "bus," the pipe coming out of the wall to the middle of three transformers between the right powerhouse and the Grand Coulee Dam. Note the workers and firefighters at lower right.

The explosion at Grand Coulee Dam this morning was not a transformer or a generator, but a line and equipment connecting the two.

Conflicitng reports this morning suggested that one or the other had exploded, but in the smoke-filled building it was hard to tell initially just what had happened.

Exactly what happened is still unkown, but a "bus," basically a large pipe that goes through the wall of the right powerhouse is destroyed.

An engineer who had been inside the damage is much worse inside the powerhouse, which may have suffered concrete damage.

The bus leads from the G-10 generator to the middle of a group of three transformers that were replaced last year, following a rupture in one of them that occurred in 2006.

Workers have reported that the transformer seems to not have suffered from the incident.

Public Information Officer Lynne Brougher said the Bureau of Reclamation will investigate the cause, but it may be some time efore it is known. She said an investigation will likely be conducted out of the bureau's Denver, Colo. office.

The Star will have more information on the incident Wednesday. 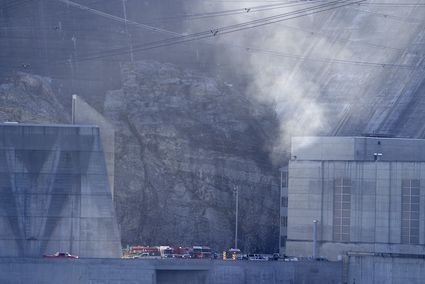 Emergency vehicles gathered outside the right powerhouse at Grand Coulee Dam, where a large transformer exploded this morning.

A large transformer exploded at Grand Coulee Dam this morning, causing serious damage, but injuring no one.

Currently several fire trucks and ambulances are parked at the corner of the third and right powerhouses at the dam, and smoke is visibile.

The transformers, situated between the powerhouse and the dam itself, are massive, changing electric power coming from the generators inside the dam to a form that can go into the region’s electricity grid.

The transformer that blew was connected to generator G-10.

Smoke has also reportedly entered the powerhouse, possibly indicating more damage than to the transformer alone.

The accident occurred about 9:30 a.m. Saturday.

At least five siren calls for assistance from neighboring fire departments were heard after the U.S. Bureau of Reclamation's own fire department responded to the accident at the initial alarm.