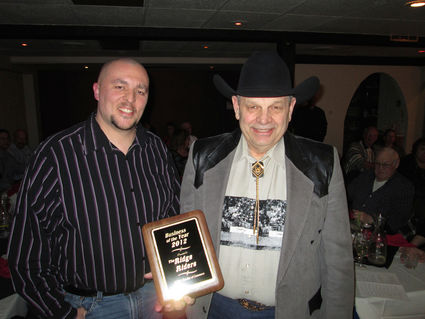 Grand Coulee Dam Area Chamber of Commerce President Jesse Utz presents George Kohout the Business of the Year award, which he accepted on behalf of the Ridge Riders during the chamber’s installation and awards banquet last Thursday evening. He was awarded a similar plaque as Achiever of the Year for his personal role in that organization’s turnaround last year. — Roger S. Lucas photo

The man you can’t say “no” to was awarded two plaques at the Grand Coulee Dam Area Chamber of Commerce’s 2013 installation and awards banquet last Thursday night at Pepper Jack’s Bar & Grille.

George Kohout, of Electric City, was first awarded a plaque for “Business of the Year,” awarded to the Ridge Riders club, of which he is president.

Moments later Kohout was called to the front again, this time as the 2012 “Achiever of the Year,” an unprecedented double recognition, this time for his outstanding leadership of the Ridge Riders last year.

Kohout was quick to point out that it took all the members of the Ridge Riders, and the community, to achieve the successes of 2012.

Last year the Ridge Riders held its first banquet and auction, held a memorial bull riding event on Colorama weekend to honor the late lifetime cowboy and rodeo personality Cleatis Lacy, and held two ranch rodeos. The Ridge Rider Colorama Rodeo was named the “Rodeo of the Year” by the Pro West Rodeo board of directors.

Kohout, as president, and ever ready to plug his group’s events, told the crowd of more than 50 that tickets for this year’s banquet and auction went on sale and the event sold out the first day.

The “Business of the Year” presentation was made by incoming chamber President Jesse Utz.

Scott Hunter, outgoing chamber president, and last year’s “Achiever of the Year” made that presentation.

Kohout and the Ridge Riders were chosen for the honor through a vote of chamber members.

Kohout, a retired dispatcher at the Bureau of Reclamation, is well known in the area as the man you can’t say “no” to. He’s the frontman who attends council meetings to solicit hotel/motel tax monies for the Ridge Riders. Councilmembers listen to Kohout and generally just give him what he asks for, because they know he will deliver.

And deliver he did. His enthusiasm helped bring back the Ridge Riders from near extinction. Now, they can bask in last year’s successes, and plan with confidence that the communities and region are behind them.

Kohout comes by his rodeo interest naturally. As a youth he was a team roper, and his interest in rodeo has stayed with him through the years.

All this enthusiasm came at a time when Kohout had a knee replaced and underwent major heart surgery, from which he is still recovering.

Ever gracious, Kohout keeps praising members of the Ridge Riders for their work and support. “I couldn’t have done it without them,” he repeated a number of times.