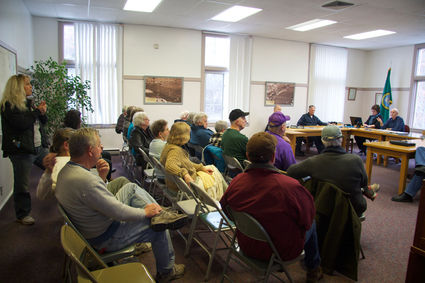 The council made the decision at a hastily called meeting Monday afternoon on Martin Luther King Day.

Even though the meeting date wasn’t announced until late Friday, the council chamber was packed and fireworks started immediately as community activist Greg Wilder and Mayor Quincy Snow tangled over the timing of the meeting.

The council, which normally meets the second and fourth Wednesdays of the month, will hold its regularly scheduled meeting tonight at 6 p.m.

Monday’s meeting was scheduled ahead of a petition that was to be presented at the regular meeting tonight (Wednesday). That petition, Wilder stated, has hundreds of signatures on it.

Citizens raised a rainbow of concerns, ranging from the way they perceived the town’s treatment of Wilder, to the cost of the proposed plant, and the cost of their monthly sewer bills. The meeting was contentious even though Councilmember Karl Hjorten advised the audience at the onset that the council was there to act on the delay sought in the petition. Later he added that it was the town’s goal to work with Elmer City on the plant.

The tone of the meeting prompted one woman to say that the discussion wasn’t honoring Martin Luther King who stood for peaceful pursuits. Another said it appeared that Coulee Dam officials had trouble “playing with others.”

Notably absent were officials from Elmer City, although Councilmember Larry Holford had been told by someone about the meeting and attended.

Mayor Snow said the council was stopping plan development so all interested parties could get together and take another look at the scope of the project and so the town could seek other funding sources or grants. He welcomed a “value engineering” study of the project, which would involve a formal study by professional engineers who do such studies.

The Colville Tribes, which could seek partial funding through the Indian Health Service, have been adamant that if they are to participate, the project plans would have to pass scrutiny of the value engineering process.

And Snow said the Department of Ecology, which has agreed to financing for the project, wanted a 60-day delay of the plan development while everyone had an opportunity to review the project. The council voted 90 days.

“We are getting a lot of interference from certain people,” the mayor said, expressing frustration.

“We are the community,” another said.

Wilder asserted the town was in the position it was because its engineers had not spent the time at the beginning of the plan to look for grants.

Snow said he had a pile of emails showing the town had sought grants from a number of sources and also had communicated with Congressman Doc Hasting’s office.

He added that a number of falsehoods had been printed in The Star newspaper about him.

Snow and the council explained to the crowd that the present plant is 40 years old and parts are wearing out.

The original plan would have cost more than $6 million but the council reduced it to $4.92 million, the amount of the loan.

Councilmember Ben Alling said that the council decided to fix up all the inadequacies of the plant now, rather than have to come back in five or six years and make more repairs.

While there was considerable discussion about the cost of the plant, and how and why decisions were made, the issue has been before the council in public meetings for years.

The audience supported the idea that the best results can be obtained if everyone’s voice is heard and that the project has the widest participation.