Volunteer of the Year for 2012: Eloise Bowman 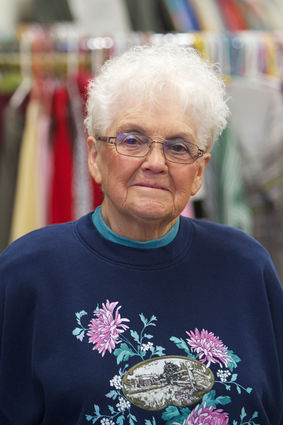 Eloise Bowman 2012 Volunteer of the Year

You could say that the fourth time was the charm.

That’s how many times over the years the 2012 “Volunteer of the Year” has been nominated for the honor.

This time Eloise Bowman won it.

Bowman received an overwhelming number of votes out of the eight candidates for the honor.

Most people will know the 2012 winner as one of the most faithful volunteers at the Senior Center Thrift Shop, where she works twice a week sorting, pricing and selling items donated by the community’s citizens.

She personifies the Thrift Store with her friendliness and a smile.

Bowman also responds to requests by local citizens who are trying to find specific items. “If you find it, give me a call,” is a frequent request.

When Bowman isn’t directly involved in the Thrift Store, she spearheads several other Grand Coulee Dam Senior Center projects, such as the Easter Basket sale, the Spring Bazaar and the Fall/Winter Sale, which recently netted the senior center $1,000. Last spring, Eloise and her helpers put together 317 of the colorful Easter baskets, a record.

In all, the projects Bowman has been involved in have netted the seniors about $22,000. Of course, she has lots of help, but you can always find her in the thick of things.

Bowman keeps three or four “fire boxes” on hand, ready to give to anyone who is dislodged from their home because of a fire. The boxes contain such things as blankets, towels, and other household necessities. In many cases, after a disaster, families are invited to shop for some of their needs at no cost. How’s that for always being prepared?

“The donated items don’t just add income for the Senior Center,” wrote Edna Hauser in her letter nominating Bowma, “this outpouring of love helps those folks on limited incomes in our community by offering clothing and household items at reasonable prices. Her efforts benefit young and old, those of varied incomes, and are key to keeping the Senior Center open.”

Charlie and Margaret Moses, who nominated her in 2010, called her “a true champion of the underdog.”

Apparently, Eloise took over the thrift shop job a few years ago because no one wanted it. She is said to “lead a team of ladies with an iron hand, yet a gentle touch.”

Bowman was raised in the area, but has lived on the east coast and in Hawaii. Two of her children live here: Kerry Noggles and Randy Bowman.

“She likes to play bingo and reads a lot, and puts a lot of puzzles together, and over her lifetime, has bowled a lot,” Noggles said of her mother’s pastimes.

Eloise is also noted for acting as a caregiver, and for quite a while cared for Jerry Seaton. She has also even taken people to Spokane to see their doctors. Her husband Ken is one of her biggest supporters and is always available to help her out.

Just to show how overwhelming her selection was, she got 46 percent of the total vote among eight nominees. Of the 213 votes cast, Eloise Bowman got 98.