Care and Share Food bank back on its feet 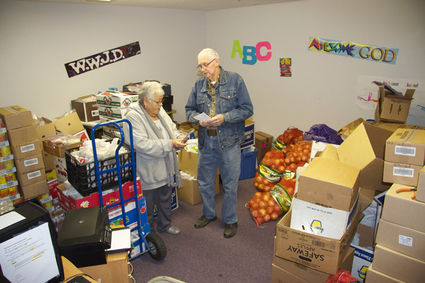 Food bank manager Fern Blaylock reacts Monday to the size of a check presented by Charlie Long on behalf of Zion Lutheran Church, the latest donation in a stream that has filled three rooms full of food. — Scott Hunter photo

Two months after running out of food and cutting back on days open, the Care and Share Food Bank is back up to speed, thanks to an overwhelming response from the community, said manager Fern Blaylock.

“I am so happy,” she said Monday, wiping a tear on her cheek after receiving two checks from Charlie Long, who presented them on behalf of Zion Lutheran Church members and friends, and Thrivent Financial For Lutherans.

The checks for a total of $2,285 were the latest in a continuing series of responses from everyone in town that began after a public appeal the food bank made at a weekly chamber of commerce meeting, Blaylock said. It started right away, with a $500 check from a chamber member.

Care and Share served 152 local families Thanksgiving dinner packages. The food bank serves from 100 to 130 families on a weekly basis.

Statewide, one in five Washington residents have made use of a food bank in the last year, leaving with an average of 15.68 pounds of food, according to new figures gathered by the Washington State Department of Agriculture.

The local food bank, located in a room in the lower level of the Church of the Nazarene on SR 174 just east of Grand Coulee, is now stocked with full shelves, and the church has even allowed the use of two more rooms, currently also full of food.

A larger-than-normal shipment also came from Northwest Harvest, after Blaylock noted in her monthly report that the food bank had had to cut back to being open a day every other week instead of once a week.

Now, the shelves are stocked well enough to handle the holiday season, mostly due to efforts like that of the Friends of Rachel school group that met Monday night at the Village Cinema (story on page 5), asking that people bring a can of food as an entry fee.

Monday morning, Blaylock thanked the entire community for the response and supplied a list of nearly 50 groups that have held one type of food or donation drive or another.

Food drives held in the last two months by: