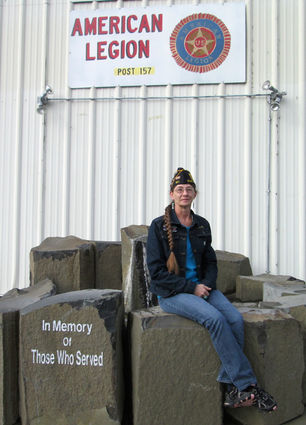 That’s when she became acquainted with this area. Her reserve unit was stationed in Spokane, and then she came to this area about three years ago.

“Not a problem,” the Navy vet says. “We are all in this together.”

While in Kuwait, her unit duty was to protect the shipping that arrived in country.

“Kuwait had only the one small port, and our job was to protect the endless stream of ships coming in to unload weapons, ammunition and supplies,” Jayne said.

She recounts that there were hostiles “out there who constantly tested our defenses.” She added, “sometimes they would come zooming in by boat and then turn away. We could see them writing and talking on their phones.”

But probably the worst of it all was the smoke and sand storms.

“We were in the middle of five refineries,” she said, “and after the Iraqis set them on fire, it was terrible. Then the sand blowing ….”

Her two tours were in small boats, similar to the Vietnam river boats.

American Legion Post 157 came alive under Henspeter, and the prospects for the future are very positive, Jayne feels.