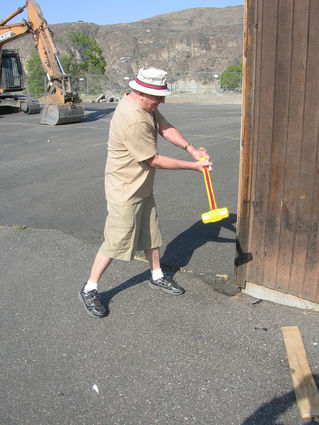 Former principal Ray Gilman got to take the first swing with the sledgehammer Monday morning as the school district had a “demolition” ceremony at Wright Elementary School. About 100 people turned out with several taking a swing with the hammer as Elder Demolition got ready to tear the building apart with a massive backhoe. Workers started the demolition noon Monday. — Roger S. Lucas photo

The south wing of A. E. Wright Elementary School started tumbling down Monday.

That’s when Elder Demolition pulled heavy equipment in to start tearing the structure apart, but not before the 1949 school building performed two more functions.

First, about 100 people turned out mid-morning Monday for a ceremonial program that allowed those present to swing a sledgehammer to start the demolition process.

It wasn’t that much demolition was done with the sledgehammers, but it permitted those who turned out an opportunity to take a swing and to say a few sentimental words about the school.

Teachers, school patrons and a few former students all got in the spirit of the program and took swings.

The second function the old school played was for a drill by the Grand Coulee Police Department Sunday, who used the building as a training site for search and rescue. Police got the OK from the demolition company and even set off a couple of “flash bangs” in the recreation gym as part of the exercise.

Elder Demolition uses heavy equipment to rip the old school apart Monday. Here it chews out a part of the building and breaks it up so it will fit into the dumpster. The entire south wing of the school is being razed while the north part is going through the abatement project removing asbestos from the site. — Roger S. Lucas photo

Elder Demolition officials said the company was right on schedule for an Oct. 13 completion date. While the demolition was going on at the south wing, IRS Environmental, a sub-contractor that has been removing hazardous material from the site, was working at the north wing.

The materials from the site are being hauled to both the Delano Regional Transfer Station and to the county landfill near Ephrata.

“We are taking as much of the material as we can to the transfer station, but they can’t handle it all,” One Elder official stated.

The Spokane-based company had two large debris containers on site Monday and plans to bring two more in to handle the debris.

The building was declared surplus a few years ago, with students moving to Center School in Grand Coulee. Wright is being razed now for the new K-12 school facility that will occupy the land where Wright and Lake Roosevelt High School now sit.

Construction on the new facility is scheduled to start early next year with occupancy in the fall of 2014.