20 percent payout in August; vote on another 30 percent 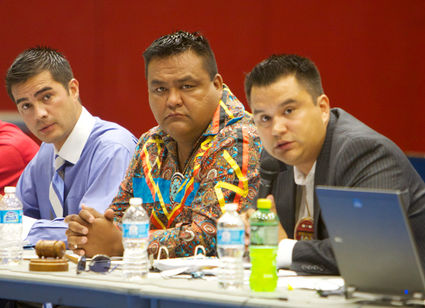 The Colville Business Council today settled a contentious dispute over a $193 million settlement before swearing in new members and reorganizing in a public meeting at the Nespelem Community Center.

The same group of 14 elected representatives that had earlier approved a plan to disburse 20 percent of that directly to tribal members and hold back 80 percent for investments and for repairing damaged tribal lands, passed a compromise with petitioners who demanded a 50-percent payout.

In a resolution that CBC Chairman Michael Finley said recognized the wishes expressed in that petition, the CBC voted to move ahead with the plan to pay out 20 percent, nearly $39 million dollars, to members on Aug. 3., then put another 30 percent up to a vote of the people this year. A passing vote on that would bring the total payout to tribal members at the 50 percent asked for in the petition.

Councilmember Sneena Brooks noted that 1,706 signatures on that petition had been verified, but there are 7,504 voting members.

“Seventy-seven percent did not get on this petition for one reason or another,” he said.

In an earlier vote, the council removed all “holds,” restrictions that could have kept some members from claiming their payments for one legal reason or another, such as money owed for back child support or unpaid debts to Tribal Credit. That detail was amended to protect the interests of children not living with their parents.

The issue has split the tribal population, hundreds of whom attended the council meeting, which was held at the community center instead of the small council meeting room so that more people could attend.

The microphone often passed to those in the crowd, including former council member Shirley Charley, who several times drew cheers by speaking on the side of a greater payout.

Those feelings seemed offset by similar levels of approval for arguments for investing money for the future.

“People are looking at us from the outside and just thinking how greedy we are,” lamented Councilmember Brian Nissen, a part of a team that had negotiated with the government on the largest settlement in Indian Country for the government’s mismanagement of assets held in trust on behalf of tribes across the nation.

Charley responded the Colvilles joined the “Cobell” lawsuit because of the “devastation” of their natural resources that had occurred under the auspices of the federal government’s trust responsibilities, natural resources that belong to each tribal member, who therefore can rightfully lay claim to the money.

“I am entitled to anything and everything that the Colville Confederated Tribes’ business council lobbies for on behalf of their members,” she said. “I’m entitled because, yes, I hold an enrollment card. … I’m not greedy.”

Even after the resolution passed, Councilmember Ricky Gabriel, for the Tribal Government Committee, proposed another resolution for a referendum vote in 30 days that would ask voters to choose whether to disburse 50, 80 or 100 percent of the $193 million dollars. 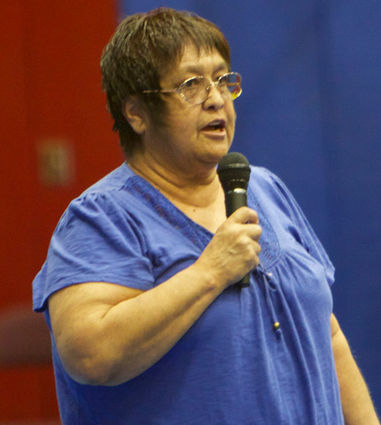 “There is no way I would ever consider giving out 100 percent of this money,” Nissen responded in discussion, to great applause. “I would never want to leave that type of a legacy of me being at this table. … We need to be thinking about seven generations ahead whenever we make these decisions.”

Finley said the Colville’s settlement was the largest of any tribe involved in the suit because they were prepared with solid research in hand that documented the problems on tribal land. Enabling the Colvilles to repair the land was the reason the government agreed to the large settlement, he said.

Gabriel’s resolution was amended to delete the 80- and 100-percent choices, in effect directing that the popular vote on the already approved referendum take place within 30 days.

Newly elected members of the Colville Business Council were voted in by their new peers to take the top posts on the council Thursday.

John Sirois, a newly-elected council member from the Omak District, was chosen

for the top leadership position of the Confederated Tribes of the Colville Reservation.

chairman of the CBC,” Sirois said. “It is an honor and humbling to be chosen for

this position. We are all aware of the significant issues we must address in the near

future, and I look forward to working with the new Council to serve our membership and

the Colville Tribes. We say lim limt’ (thank you) to all our membership for their voices

Michael O. Finley, from Inchelium, who had served as CBC chair for three

member from Omak, will be the council secretary and chair the Employment and

Education Committee. The chair, vice-chair and secretary positions are all members

from the Nespelem District.

Nancy Johnson, a newly-elected CBC member from the Nespelem District, will

was selected as the Chairman of the Law and Justice Committee.

will chair the Management and Budget Committee, while Joseph Somday, a new CBC

member from the Keller District, will chair the Natural Resources Committee.

Benny Marchand, Jr., who was recently appointed to fill a vacancy in the Omak

District, will chair the Community Development Committee. Luana Boyd-Rowley, an

incumbent from the Inchelium District, will lead the Council’s Tribal Government

elected CBC member from Inchelium, will chair the Culture Committee.

Other members of the Council include incumbents Richard Swan Sr. of Inchelium

and Ernest “Sneena” Brooks III of the Omak District.

There was a tie vote for the Chairmanship, which was decided by a coin toss. All

other leadership positions were all named by acclamation of the entire CBC.

address the issues of importance to our members,” Sirois said. “We will waste no time in

getting down to business.”

Thanks for the coverage and hope that it continues. The issues that are of importance haven't been coming out and today I'm happy to see this article. I want to comment on Councilman Brooks re: percentage of signatures needed/not voting. I FIRMLY believe that with almost 1900 Inactive Voters that have NEVER Voted, in ANY Election even tho eligible to vote, haven't for whatever reason. IF there was a true percentage of members voting required to be voted in for Council, how many today, would be representing us? Thanks again and have a good day.

Scott Hunter, Great work on getting the Rez news out. RC

Give it all to the people.