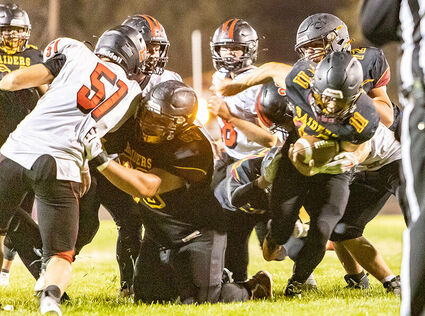 From a yard out, Brit Egbert heads for the goal line with blocking help from Gage Olbricht (63), William Labro (12), and Tanner Whitelaw (33) during Friday's Raider win to surpass Spangle for the number-two spot in the state 2B ranking. - Jacob Wagner photos

The Lake Roosevelt Raiders played at home in Coulee Dam against Liberty High School Friday, securing the win for a 4-0 win-loss football record.

The Raiders won 18-7 against the Liberty Lancers, and LR is now ranked second in the state for 2B football teams, according to the Washington Interscholastic Activities Association, behind only Okanogan, which is also 4-0 this year.