Quick boat cleaning can save millions of dollars 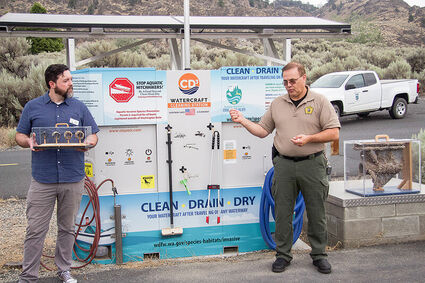 Taking five minutes to use a new, free boat-cleaning station at Northrup Boat Launch could help save millions in dollars of damage that invasive species can cause.

A new "Clean-Drain-Dry-Dispose" unit, also known as a "CD3" system, was demonstrated at Northrup Boat Launch Aug. 9 with representatives there from the U.S. Bureau of Reclamation, which funded the system, as well as from the Washington Recreation & Conservation Office (RCO), Washington State Parks, the Washington Department of Fish & Wildlife, the Colville Tribes, Lincoln County Noxious Weed Control, and the Upper Columbia United Tribes.

The cleaning station was strategically placed at the Northrup Boat Launch because of the high amount of boating activity there.

Similar stations are also being tried elsewhere in the state. The data collected from these stations will be used to help determine where to put more stations.

The cleaning station includes an air blower, vacuum, a brush, and tongs to remove something from a hard-to-reach place, such as under a boat. Those were demonstrated by Justin Bush of the RCO and Captain Eric Anderson of the WDFW, who is in charge of their watercraft inspection program.

"We have to change the habits of the recreational boater, and get them to clean, drain and dry their boat after they pull it out of the water," Anderson said, adding that the simple habit is easy and can help prevent a lot of damage.

Although they aren't currently in Washington state, quagga mussels can accumulate rapidly and pose a costly threat to dams and irrigation systems. Bush said they could cause $100 million a year in damage.

The presenters showed samples of quagga mussels from Lake Mead in Nevada that were attached to a boat motor, as well as an accelerated accumulation of them on pieces of pipe after two, four, then six months.

They can live for a week, or even longer under certain conditions, on a boat after it has left a body of water, giving boaters, and the mussels, ample time to move to a new body of water.

The mussels can eat phytoplankton in large numbers that would normally be eaten by the native fish, causing disruption to the ecosystem of a body of water. 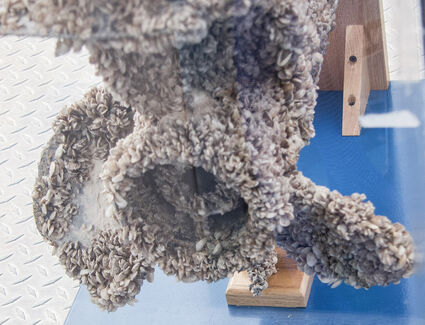 A boat propeller is shown encrusted in quagga mussels from Lake Mead.

Bush said other invasive species of plants and wildlife that pose threats to bodies of water include Eurasian water milfoil, American bullfrogs, and northern pike.

Puddles, a 5-year-old Jack Russel terrier mix owned by the WDFW, demonstrated her ability to sniff out the larvae of invasive mussels, such as zebra and quagga mussels, attached to a boat. Those larvae, in small numbers, are too small for the human eye to see.

Once she finds them, she sits and barks; then stricter cleaning efforts can be used to remove the mussels.

The presentation emphasized that keeping the mussels out of the state can prevent damage to ecosystems, dams, irrigation, and other infrastructure, and ensure that a body of water remains open for the public to enjoy. That makes the prevention of their spread a common goal for all the groups in attendance, Anderson said.