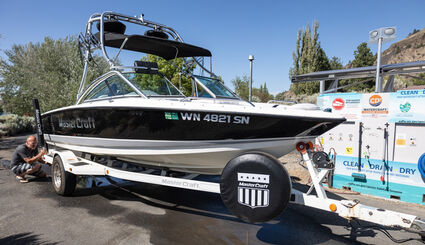 Preventing the spread of invasive species can save millions of dollars, and boaters at Northrup Boat Launch can now use free equipment to help with that prevention.

A ribbon-cutting ceremony and demonstration of a "Clean-Drain-Dry-Dispose unit, known as a CD3 system," will be held on Aug. 9 at 10 a.m. at Northrup Boat Launch.

The Washington Department of Fish and Wildlife partnered last year with the Washington Invasive Species Council, the U.S. Bureau of Reclamation, Washington State Parks, the U.S. Park Service, and area tribes to have the system installed there "to help fight the spread of aquatic invasive species," according to a July 21 WDFW notice about the event.

Invasive species have huge potential to do damage to local ecosystems and human-made infrastructure. Zebra mussels, for instance, are mollusks so tiny that up to 100,000 of them can fit into a square meter. They've spread across the country since they appeared in the Great Lakes in 1986.

"This is fantastic," said Nate Graf, a Whatcom County boater who had just finished using the station Tuesday and has been coming to local lakes since the 90s.

But Graf, after noting launches on the west side of the state have been required use for some time, said he didn't know about all the features of the station at Northrup, such as compressed air for drying and a vacuum.

"CD3 systems are free, user-operated cleaning equipment for boats and other equipment used on the water," the WDFW notice said. "The wet/dry vacuum and blower system allow boaters to remove weeds, plant fragments, and other aquatic invasive species that, if they were to get into our waters, could proliferate and take over, costing millions of dollars to manage."

The Aug. 9 demonstration includes showing people how the unit works, hearing from some of the groups involved on how this technology will benefit them and everyone in Washington, as well as a demonstration from WDFW's invasive mussel-sniffing dogs.

"They will show how they use their nose to find tiny mussels that are too small for the human eye to see," the notice reads.