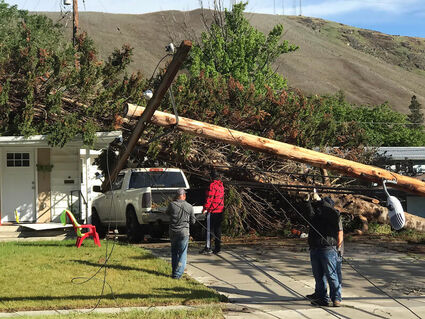 A fir tree from a neighboring yard toppled in the wind Sunday, held up here by internet utility wires that kept it from falling further onto a truck. The owner backed the truck out "without a scratch," but the front porch was "a little bent," noted the occupant of the house, Karen Elizabeth Wapato, who supplied the photo.

A storm that ripped through the area Sunday afternoon toppled a tree that pulled down a powerline in Coulee Dam, closing River Drive and leaving the area without power for several hours.

A 60-foot evergreen tree fell across a front porch at 1015 River Drive but didn't damage the house or a pickup parked in the driveway - under the downed tree.

But it did pull down power lines crossing River Drive, which is also SR-155 through town. Coulee Dam fire trucks closed the road while Nespelem Valley Electric linemen worked make the area safe and restore power. Traffic was diverted.

That took about six hours, according to Karen Wapato, who lives there and was looking out the door at the sudden storm. 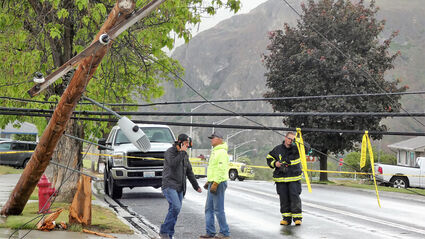 A Coulee Dam fire truck in the distance blocks River Drive until Nespelem Valley Electric clears the road of wires. The pole snapped as the occupants of the house were looking out the door at the sudden storm. - Nora Jenn photo

She said they saw the pole by the street break near its base as the fir tree came down across the wires. Cables strung to deliver internet service held up the tree and kept it from doing more damage, Wapato said. "It was just surreal."

With the wires down, "we didn't really want to leave the house" until emergency services personnel checked out the situation, she said.

She noted that sometimes during a storm, they like to sit on chairs on that porch, the only part of the house that was damaged at all.

"I can only imagine how much worse it could have been," she said.

The National Weather Service had warned that morning of possible flash floods in the region near burn scars, and that some areas could see half to three-quarters of an inch of rain in an hour, along with high winds.

Local weather watcher Bob Valen said his equipment measured nearly half inch of rain for the day and recorded a wind gust close to 40 mph.

Wapato said she was surprised by the roots of the tree, which she said only reached a couple feet into the ground.