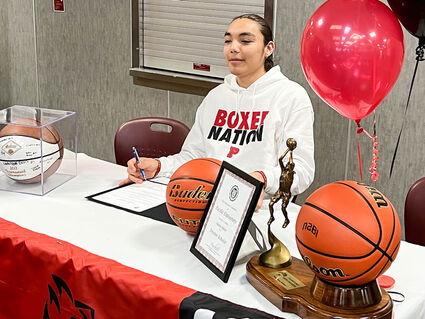 Alonzo Adams signed a celebratory letter of intent May 5 to attend Pacific University in Oregon, where he'll play basketball and study hard.

In a small ceremony in the Lake Roosevelt High School HUB with family, friends and teammates, Adams signed the letter saying he intends to play basketball for NCAA Division III school in the 2022-23 school year.

A table of basketball mementos from his high school years also included a framed certificate of admission to Pacific University as a "trustee scholar," an award higher than a straight athletic scholarship, which the university promoted him to after examining his academic record, according to his mother, Shoshannah Palmanteer.

"Every time I go into the gym at night, he's in there working, working," said Raider head basketball Coach Jeremy Crollard. "I think he's going to be a multi-asset for this program, and I think they got a steal."