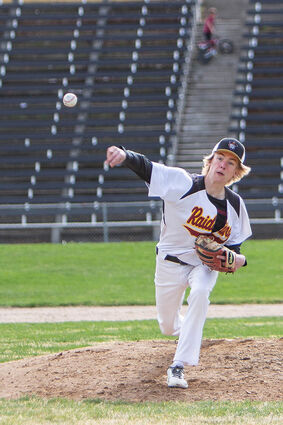 Tanner Kiser pitches in the first LR win of Friday's doubleheader against Manson.

The Lake Roosevelt Raiders baseball team is having a winning season despite a loss to Brewster last week.

The Raiders got shut out on their home field in Coulee Dam by the Brewster Bears March 29, losing the game 13-0.

"We got a couple hits, but didn't do too hot in that game," Raider Head Coach Billy Nicholson said. "Brewster is a really good team," he said, adding that the Raiders walked the Bears too much. 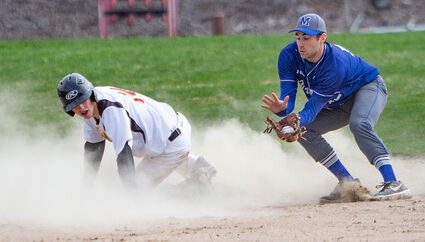 Wyatt Egbert slides into second on a steal as the Manson second baseman catches the ball.

But things went better for the Raiders in an April 1 doubleheader with the Manson Trojans.

The Raiders won the first game 10-0 with a good pitching performance from Tanner Kiser, Nicholson explained, and won the second game 11-1 with Tyson Nicholson on the mound, striking out 12 Trojans.

"Everyone's starting to get better," he said, adding that they will "keep plugging away," in the season.

The Raiders have 5-2 overall win-loss record, 3-1 in the league.

Brewster leads the Central Washington 2B league at 3-0 in the league, 7-0 overall.

Wyatt Egbert slides into second on a steal as the Manson second baseman catches the ball.