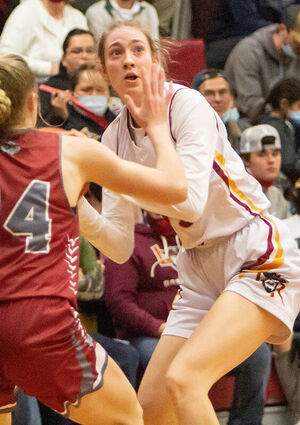 Audrey Hansen about to take a jump shot against Okanogan. - Jacob Wagner photos

The Lake Roosevelt Lady Raiders beat ACH last week, but then suffered their first basketball loss of the season at the hands of Okanogan.

The Lady Raiders won a road game against Almira-Coulee-Hartline by 39 points with a final score of 74-35 Jan. 4.

Finley dominated in rebounds with 12 in the game. She also had five blocks.

The Lady Raiders suffered their first loss of the season in Coulee Dam against the Okanogan Lady Bulldogs Jan. 7, with a final score of 63-57, giving LR a 7-1 win-loss record.

There were plenty of lead changes in the game.

LR led 19-12 at the end of the first quarter, but Okanogan closed the gap, briefly taking the lead halfway through the second quarter, going up 21-20.

LR took the lead back to end the quarter, leading 34-30 at the end of the half. 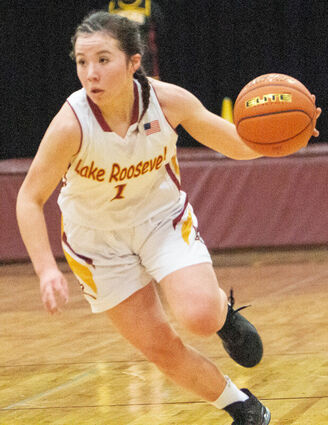 Halle Albert brings it against Okanogan.

Despite the loss, Hansen shined with an incredible 34 points, including going 10 for 11 from the free-throw line.

Albert and Marchand each scored eight.

LR was scheduled to host Brewster in Coulee Dam yesterday, results of which will be reported in next week's Star.

They are scheduled to play at home against Yakama Nation Tribal School on Thursday, Jan. 13, at 4:45 p.m.