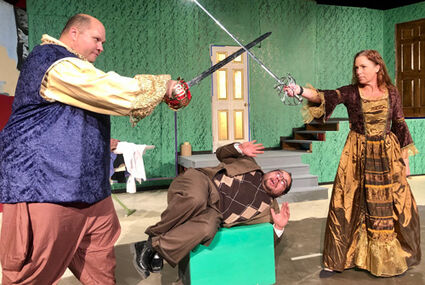 Ken Ludwig's hilarious backstage farce, Moon Over Buffalo will be presented by Masquers Theater in Soap Lake. The sidesplitting comedy will be opening October 22nd and running through November 7th, Friday and Saturday evenings at 7:30 and Sunday Matinees at 2:00.

It is the summer of 1953, and George and Charlotte Hay (played by the hilarious Christopher Longstreet and the captivating Melissa Sloan), formerly couple of Broadway stars, have taken their run-down touring company to Buffalo, New York. In Buffalo they have the intention of running the plays "Cyrano de Bergerac" and "Private Lives" in repertory, all the while grumbling about missed Hollywood opportunities. But on-stage harmony is destroyed when George impregnates the company's ingenue, Eileen (played by Pamela Ramirez in her stage debut). When Charlotte learns of this, she prepares to run away with the family lawyer, Richard (played by Masquers veteran Darryl Pheasant), sending lightweight George on a grief-stricken drinking binge.