August was a bad month for COVID in the Coulee 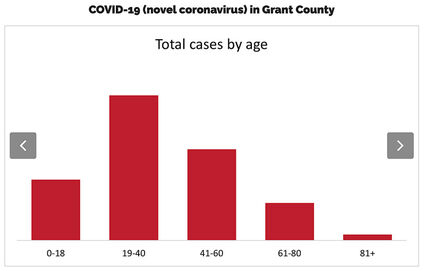 A chart from Grant County Health District's website shows the age groups of those who have contracted COVID-19 in Grant County through Aug. 31.

Cases of COVID-19 have doubled in less than a month in the cities of Electric City and Grand Coulee.

Since Aug. 4, local cases in Grant County have doubled to 98 total cases, up by 13 in the last week.

Grant County Health District Tuesday reported 286 additional cases countywide since Friday, with 17 patients currently hospitalized for covid, ranging in age from their 20s to their 70s.

A rate lower than 200 used to be the metric for whether a county could have fewer restrictions on businesses and events.

According to Okanogan Public Health, Coulee Dam has had a total of 88 cases, up 12 since last week, including four new cases reported on Aug. 30.

Elmer City has had 21 total cases, up one since last week.

Nespelem has seen 97 total cases, up nine since last week, including one case reported on Aug. 30. The Colville Tribes reports 27 active cases there, of 54 currently on the reservation.

OPH announced Aug. 25 that an outbreak associated with the Omak Stampede Aug. 12-15 had resulted in over two dozen new cases.

Okanogan County has an incidence rate of 858 cases per 100,000 population.

Lincoln County reported 73 new cases in the past 14 days for an incidence rate of 666.

Taken together, Grant, Okanogan, Lincoln, and Douglas counties are seeing their highest seven-day average case counts by far since the start of the pandemic, according to metrics at the state Dept. of Health.

With the drastic increase in Covid cases, I can't believe that school is opening face to face classes and without a distance learning option. When anytime a group function causes the numbers to go higher. Is this in the best interest of of students and staff or the community? Medical facilities are overflowing with cases as we speak, but school sports are alive and well despite the dangers. This all seems to be more about economy than caring about people.