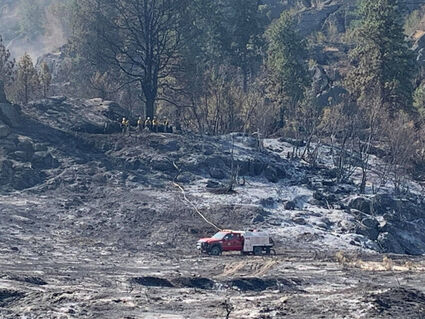 A team of firefighters stand at the top of a burned hill in Northrup Canyon Saturday.

The Northrup Fire that started Thursday along highway 155 is now 65% contained after burning an estimated 252 acres, an update from the fire management team in charge said Saturday night.

3 Interagency Incident Management Team 2, which assumed command of the fire at 8 p.m. July 23, said all areas previously at a Level 2 evacuation (get ready to leave) have been stepped down to a Level 1 (be aware), including the single home at the foot of Northrup Canyon whose residents were evacuated Thursday evening.

The area east of SR-155 from milepost 18 to Osborn Bay Campground are also on a Level 1 evacuation notice.

On the fire Saturday were 112 personnel, one helicopter, two water tenders, 16 engines and two hand crews. Some local crews were reportedly back on the fire after a rest.

Local firefighters worked the fire from its start about 5:30 Thursday night into Friday morning.

Professional tree fallers have been brought in to take down hazardous snags.

The northeastern and eastern perimeters are in mop-up.

Unburned patches within the perimeter continued to burn throughout the day, producing some smoke.