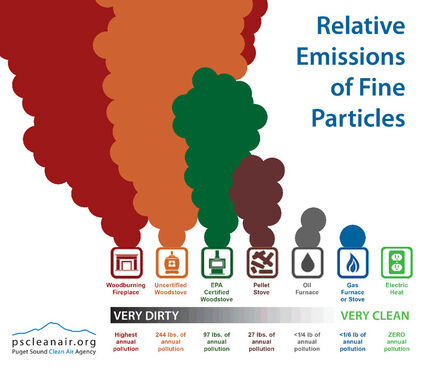 Last month we addressed the general state of air quality monitoring across the nation and more specifically here in the state of Washington and locally. To summarize, the agencies that are charged with the matters of informing their public of air quality issues are lacking. Regrettably, their bureaucratic hands are somewhat inhibited due to funding shortfalls amid other things. Regarding awareness of local air quality, up until the past few years, we simply didn't know what was happening with the air we breathed into our lungs.

When we visit a doctor, we get real-time reading of our body temperature, blood pressure and so on. Accurate, real-time data we need to know. Today, here in the Coulee, we now can get real-time air quality data. It's available at your fingertips on a website called Purpleair.com. Thanks to the generous donation made by the Grand Coulee Dam Rotary Club, four Purpleair air quality sensors were donated to our community. Two are in place and the remaining will be in place or soon. There are also two privately purchased sensors as part of the growing network of air quality sensors in the Coulee. The air quality readings are streamed to the Purple Air website about every two minutes. You can view the map on the website by simply narrowing down the map to our location. You will see each Purpleair sensor and view the air quality readings for that particular area of the Coulee.

Recently, I attended a webinar that addressed the government website called AirNow.gov. "AirNow is a partnership of the U.S. Environmental Protection Agency (EPA), National Oceanic and Atmospheric Administration (NOAA), National Park Service (NPS), NASA, Centers for Disease Control, and tribal, state, and local air quality agencies," the site explains. One of the most important items mentioned, and with some detail, is how managers and scientists who work with the AirNow website utilized personal Purpleair sensors. They made some minor mathematical adjustments using an algorithm and added the Purpleair data to the AirNow website during last year's wildfire season. They acknowledged that it provided much better information and data to the public and officials of specific local areas heavily hit by wildfire activity.

It's not just wildfire smoke that causes potential harm to vulnerable citizens - old and young alike. Burn piles, wood fireplaces, wood burning stoves and older wood pellet stoves contribute to poor air quality. The chemicals released when wood is burned are toxic. The human sentiment that wood smoke is benign is wrong. For some, wood burning may be the only heat source during the winter months. Some decades ago, it was my primary source of heat in South Dakota. Today we are more knowledgeable of the toxins that are released with wood burning and that they are harmful to those around the smoke - family, friends and neighbors. To name a few – carbon monoxide, oxides of nitrogen, hydrocarbons, volatile organic compounds, formaldehyde, polycyclic aromatic hydrocarbons, dioxins & furans, and acrolein. Keep this information in mind if you have to burn wood.

For the remained of February, the Climate Prediction Center (CPC) is showing a 48% likelihood of below-normal temperatures and an equal chance for normal, below- or above-normal for precipitation. It's been an off-beat winter so far. Of course, it's not over until it's over.