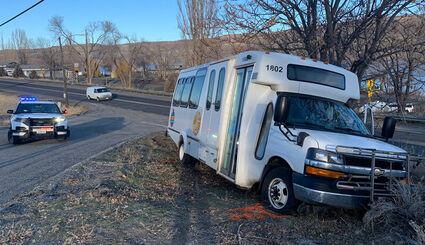 A Grant Transit bus where it stopped after running over a stop sign at SR-155 and Hillcrest in Electric City, where a driver from Grand Coulee was arrested. - Jacob Wagner photo

A man driving a stolen Grant Transit Authority bus out of Moses Lake was pursued by more than two dozen police on the morning of Feb. 3, with the chase ending in a minor crash.

The bus had been reported stolen at about 7 a.m., and Moses Lake Police and other agencies were watching for it when a Grant County Sheriff's deputy spotted it about 30 minutes later.