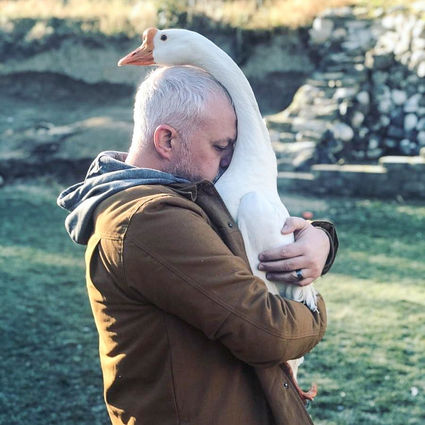 Ben Hughes gets a hug from Chapo. - Photos courtesy of the Hughes family.

The Hughes household in Grand Coulee includes two geese and a duck, all named after violent gangsters.

A duck named Allie was originally named Al Capone, but when she started laying eggs, her name was changed.

"Duck eggs are delicious," Ben Hughes noted, speaking with The Star about his family's pet flock over email.

Allie, along with a goose named Pablo, after Pablo Escobar, both came from North 40 Outfitters in Omak.

The other goose, named Chapo, or El Chapo, comes from NorthWest Seed & Pet in Spokane.

"They all follow me around, but I imprinted on [Chapo] when he was a hatchling," Hughes said. "I used to let Chapo sleep on my chest when he was a gosling. He must think I'm his mom or something. So now as a full-grown goose, he wants me to pick him up or at least be next to me at all times in our back yard."

Although hatched only about two weeks apart, the elder Chapo was about five times the size of the other two birds when they came to join the family flock.

"Pablo and Allie we got later and didn't get the same attention from me," Hughes said, "but Chapo imprinted on them, so they follow him."

"So basically, Chapo is my buddy," Hughes continued. "He follows me around. Talks to me. Rubs his head on me until I pick him up. Likes to supervise any yardwork or projects in my shop. Currently I'm finishing a butcher's block for our [kitchen] center island. I also have a '53 Chevy that he likes to help with. The other two birds just kind of stand around and watch him interact."

Hughes assured The Star that the butcher's block isn't for the pet birds.

Matthew Hughes, 16, "started the whole gangster-naming convention," Ben Hughes said. "He only wanted a duck. And we promised him he could name it Al Capone. Not sure why. I think we watched The Untouchables and he's been on a roll since."

Bosten Hughes, 15, stuck with the gangster theme, and, to celebrate the family's Mexican heritage from his mother Claudia's side, came up with the names El Chapo and Pablo Escobar.

Sophia Hughes, 12, "doesn't play nice with the geese," Ben Hughes said. "She's cool with the duck, but the geese chase her around the yard. I tell her they smell fear. It's hilarious, regardless."

Hughes said the birds have a kiddie pool right now, but the family plans to install a pond in the backyard next spring.

And these fowl have more in common with a canine pet than you might think.

"They're great at guarding the back yard," he said. "If they see anything out of the ordinary, Chapo starts honking to alert us. When I come home from work, Chapo hears the truck and meets me at the back door."

The birds don't try to escape either.

"Pablo will let me pick him up and throw him in the air," Hughes said. "He loves to try and fly, but he's slightly too top heavy. Chapo and Allie both had their wings clipped, so they don't go anywhere." 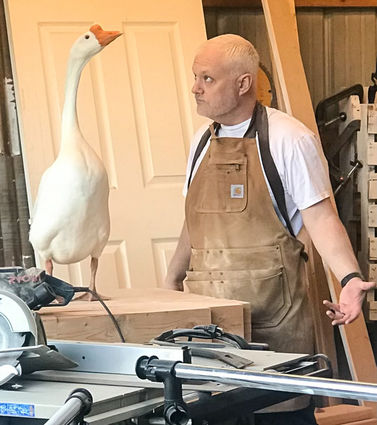