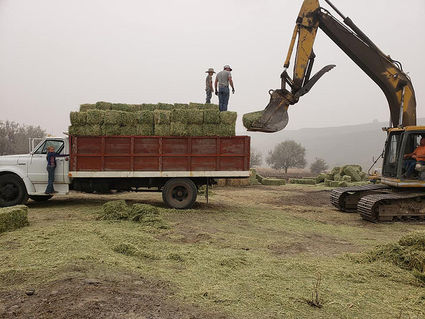 Farmers use heavy equipment to load outsized hay bales on a truck for delivery into the field.

Ranchers devastated by fires in Douglas, Okanogan, and Lincoln counties have received some relief in the form of free hay to feed their horses and cows.

Okandogs, a non-profit organization that usually works to help get dogs into rescue facilities and find homes, undertook the effort to get hay delivered to farmers who need it.

Tiffany Wiebe Wisdom, who volunteers for Okandogs, spoke to The Star on the phone on Monday about the effort.

Wisdom's own farm in rural Douglas county outside of Mansfield lost a lot of fencing and hay in the Pearl Hill Fire that burned nearly 234,000 acres in early September.

Tom Short, who founded Okandogs, asked Wisdom if she needed help with dogs she was sheltering - or anything else. Wisdom was reluctant to ask for anything, but when pressed said she could use some hay for her animals. A volunteer brought two tons of hay the next day.

Short and Wisdom talked about the need for hay that many local farmers and ranchers must be going through, a conversation that started the effort to collect donations, find drivers, sources of hay, and to find out who needs it.

"It just blew me out of the water, the amount people donated," Wisdom said. It gave her a lot of "faith in humanity."

Hay distributors dropped their prices as low as they could, she said, and hay donations came in from as far as the coast, people trucked the hay for free, and other acts of kindness helped the effort.

Originally aiming to provide farmers with about two weeks worth of hay, the success of the operation has raised their goal to three months or more.

Wisdom estimates that one head of stock - a cow or a horse - eats about two tons of hay during a winter and that there are about 8,000 head of stock in need of feed in the area.

So far, the operation has delivered 1,847 tons (the equivalent of about 41,000 90-pound bales) to around 100 different locations in Okanogan, Douglas, and even Lincoln counties, with some larger deliveries around 30 tons and some smaller deliveries of about two tons.

"It's amazing," Wisdom said about delivering hay to the grateful farmers, which often requires going a special way on rural roads to access the farm. "These farmers who usually have too much pride and will normally say 'no' [to help], they're standing there with tears in their eyes." 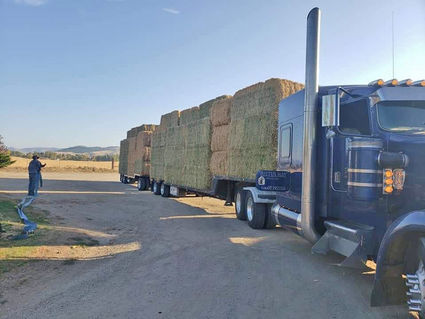 A Justus Hay big rig is ready for unloading at one a farm getting one load of the more than 1,800 tons delivered in the effort to keep stock from starving following the huge fires that devastated much of the farming community in local counties this year. - photos from Tiffany Wiebe

Wisdom said that just some of the many people who have been instrumental in the effort include: Justus Hauling, Carvo Trucking, and Double K Farms, who all helped in delivering hay; her husband Victor Wisdom, Cody Hodgin, and Steve Bryson who have also helped with deliveries; Tom Short who founded Okandogs along with his wife Jan; Summer Huckaby who has helped find donations and set up deliveries, and Penelope Varn, who along with Wisdom, helped find the farmers in need.

"We were glad to be able to do it and that it worked out," Wisdom said. "It's been fun to be a part of."

The effort is ongoing, and those who would like to help can find Okandogs or Tiffany Wiebe Wisdom on Facebook, or they can donate using paypal at paypal.me/okandogs, or mail a check to: