Fires all around us still burning 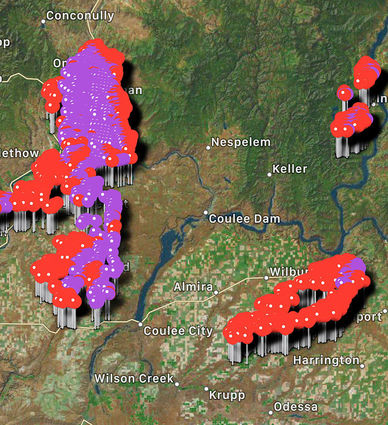 Sept. 11, 9:30 a.m. update: The Cold Springs Fire is now at 187,689 acres and is 25% contained, according to a Sept. 10 update from the Northeast Washington Interagency Incident Management Team. Power companies are working on

replacing poles and to restore power in affected areas.

"Priorities today will focus on the area east of Omak Lake and the Haley Lake area," the update says. "This area is where the most fire activity is and firefighters on the ground will be assisted by bucket operations from a helicopter."

The Inchelium Complex fires including: the Inchelium Highway Fire (6,507 acres), Fry Fire (500 acres) and Kewa Field Fire (10,079 acres) are at 25% containment, a Sept. 11 update from the Colville Tribes says. The cause of the fires remains under investigation. There are 229 personnel working on the fire.

Sept. 10, 11:10 a.m. update: The Inchelium Complex fires including: the Inchelium Highway Fire (5,453 acres), Fry Fire (500 acres) and Kewa Field Fire (8,881 acres) are all actively burning and are at 20% containment, a Sept. 10 update from the Colville Tribes says. The cause of the fires remains under investigation.The Seyler Valley Road north of Bridge Creek is closed, and Hall Creek Road is closed. Bridge Creek Road remains Open.

"Fire Crews made good progress yesterday and overnight,according to a Sept. 10 update from the Northeast Washington Interagency Incident Management Team. "Overnight crews worked on containment lines in all three divisions of the fire with the main focus being the Haley Creek area. This is the area where the most active fire is located, and additional crews are working in that area today. We continue to receive additional resources and aircraft will be available to assist firefighters on the ground as needed."

Highway 155 is open to one lane with a pilot car escorting traffic from Columbia River Road near Nespelem to Hayley Creek Junction near Omak.

When they decided to evacuate Mansfield Monday morning, nobody could actually leave town. The fire and smoke made the roads impassable, so law enforcement officers about 10 a.m. were telling people they should go to the school, just outside of town.

It was a horrific day across much of the state, as the fire weather that had been predicted for Labor Day lived up to the red flag name, scorching some 330,000 acres across the state with the flames that raced across brush and exploded trees until they came to small towns and neighborhoods.

They’re still not out, although winds quieted about 8 p.m. Monday as firefighters and law enforcement worked into the night.

The fire that swept across Douglas County had started far north, near Omak on Sunday night about 9:45. When Monday’s high winds came, it raced down the valley that holds Omak Lake on the Colville Indian Reservation and jumped the Columbia River into Douglas County. The Cold Springs Fire had burned 163,000 acres as of Tuesday night. It was 0% contained. Several structures are lost. At one point a sheriff’s deputy left a level 2 evacuation notice at Chief Joseph Dam.

Ron Rosenberg was on the fire all day with Lincoln County’s Fire District 9. He said they saw the fire advance three miles in under 20 minutes at one point.

Lincoln County had its own major fire take off from Hawk Creek Road about the time Mansfield was being evacuated. Tuesday night, it was estimated at 100,000 acres. The Whitney Fire was 0% contained.

Gov. Jay Inslee said Tuesday the total acreage burned in one day was more than had burned in 12 of the last 18 years in Washington.