Even heavier smoke is heading our way 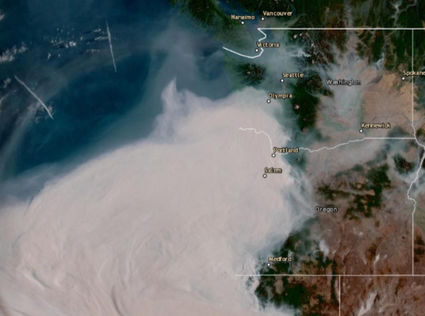 You should probably sleep with the windows closed as smoke from fires along the west coast of the United States has gathered in the Pacific Ocean and is about to blow our way.

The Washington Department of Ecology posted a satellite photo of the smoke on Twitter earlier today.

"Here's the forecast we've been dreading," the tweet reads. "A huge mass of smoke from wildfires in [Oregon] and [California] has been building up off the coast. It's now headed our way." Western Washington, Southwestern Washington, the Columbia Basin and Spokane "will wake up to 'unhealthy' air quality Friday."

And the National Weather Service put up a motion graphic to show the predicted path of the smoke they say is coming.

Here's smoke forecast for the next 36 hours. It shows the smoke from western OR spreading east and reaching the Inland Northwest Friday afternoon into Friday night. #wawx #idwx pic.twitter.com/NWkmQrvr2G