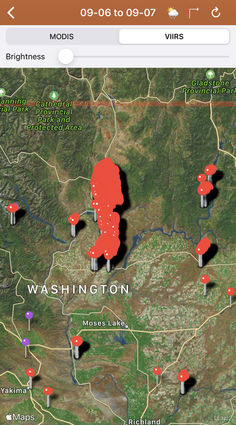 Among the many fires burning in Eastern Washington tonight are five on the Colville Reservation, including three on its eastern edge that have consumed about 8,000 acres, where evacuations are underway.

In Lincoln County, sheriff's deputies are notifying residents of Level 3 evacuation orders now (7:45 p.m.) along the entire Hawk Creek Ranch Road and telling residents in Hawk Creek Estates to get ready, a Level 2 evacuation notice. We believe this is now called the Whitney Fire.

It had burned an estimated 600 acres by 4 p.m., and the state has mobilized, ordering two strike teams to the fire.

Evacuation notices are at various levels in parts of at least six counties tonight.

Smoke from the reservation fires is drifting this way in the winds that kept firefighting aircraft grounded today. Those winds should be letting up about 8 p.m., forecasts say.

The Fry Fire near Moon Mountain had rapidly burned 500 acres by 4 p.m., a press release from Mount Tolman Fire Center said. The area is under a Level 3 evacuation for residents living near Twin Lakes and Meteor Road.

The Kewa Field Fire has burned 5,000 acres, and small crew of firefighters are constructing fire lines around structures. Residents are under a Level 2 evacuation notice.

The Cold Springs Road Fire was reported Sunday night at approximately 9:45 p.m. near Omak. As a north wind drove it through grass and sage brush, it quickly burned 10,000 acres and jumped the Columbia River to Douglas County. It is burning toward Bridgeport and several structures are threatened, including homes, tribal facilities and outbuildings.

Tribal Police reported one home lost to fire. This area is under a Level 3 evacuation for residents along highway 97, including residents at Timentwa Flats, Cold Springs Road to Omak Lake and 8th Ave. in East Omak.

The Sleepy Hollow Fire had been burning a stockpile of woodchips from the former Mill. High winds caused the fire to merge with the Cold Springs Road Fire, Mount Tolman authorities said. A Type 3 Team has been ordered and base camp will be setup at the Omak Stampede Grounds.

The National Weather Service has been warning for days that we would see fire weather conditions this weekend. They were right.