Level 2 and 3 Evacuations occurring; this story will be updated 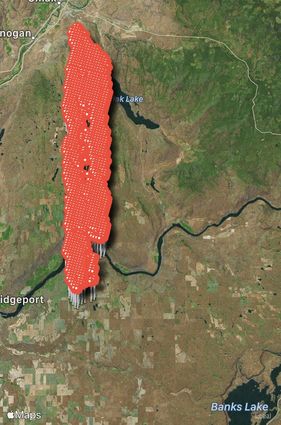 Bridgeport and Bridgeport Bar area is under a Level 3 evacuation, and US 97 is closed from Pateros north.

#ColdSpringsCanyonPearlHillFireUpdate: Level 3 evac notices have been issued to the City of B.port and B.port Bar. Residents are being directed to leave towards Brewster and contact the Red Cross (509) 670-5331 if they require shelter assistance.

Douglas County authorities just decided to evacuate Mansfield at 10 a.m. today (Sept.7) even though there is no way out of town due to "zero" visibility and roads being closed due to the raging wildfire.

Residents are being directed to the school.

Those affected by evacuation notices should call ‪(509) 670-5331‬ for shelter assistance, the Douglas County Sheriff's Office posted to its Facebook site just after 7:30 a.m.

The Pearl Hill Road area is also being evacuated, according to radio traffic. No word on where those residents should go yet.

All of SR-172, which goes through Mansfield, is closed. SR-17 is closed from Sims Corner, the intersection with SR-172 that leads to Mansfield, to Bridgeport.

Okanogan County authorities declared a level 3 evacuaiton west of Timm Road along the Columbia River to State Route 17 and north on State Route 97 to Malott just after 4 a.m. this morning.

US 2 is closed at Farmer, the junction with 172 about halfway between Waterville and Coulee City.

The Cold Springs Road Fire started near Omak on the Colville Indian Reservation during the night, and was propelled south under heavy winds past Omak Lake and the Cameron Lake area, jumping the Columbia River and crossing into Douglas County.

Douglas County Sheriff deputies are evacuating residents, some of whom are deciding to stay, feeling safe in the middle of plowed fields.

The fire started Sept. 6, at approximately 9:50 p.m., according to the state Fire Protection Bureau. The fire has been estimated at 8,000-9,000 acres and growing. It is threatening homes, crops, and power lines. The fire cause is currently under investigation. Mobilization specialists from the Fire Protection Bureau have ordered five strike teams and air resources.

#ColdSpringsCanyonPearlHillFireUpdate: Level 3 Evacuation Notices issued for Mansfield. All routes out of town are unsafe for use due to extreme visibility conditions. Residents asked to securely shelter in place if possible or use emergency shelter at the Mansfield School gym.

Ranchers near Mansfield just posted this video taken as they were leaving ahead of flames. Cora Nordby displayed phenomenal calm in several videos and photos she posted publicly, including some showing the burned landscape and fencing, which as ranchers know, is a major investment and expense that now must be replaced.

Later, all was well, she said. "Crisis averted!!!! Alleluia! 🙌 Fire went around...we have “burnt toast edges” and lost some junk pile stuff but all is well," she posted at 1:28 p.m.

Thanks for the timely updates, Scott. I know how hard it is to sift through all the reports and verify information for accuracy, but your efforts are so very helpful as conditions change and develop. Much appreciated!